Few people in the NFL media are closer to Marshawn Lynch than former Seahawks’ fullback Michael Robinson. The former Seahawks player turned NFL Network analyst recently offered his thoughts on Lynch’s future for 2020, and it sounds like fans may get another dose of Beast Mode next season.

“My humble opinion, I think he wants to play, and I don’t think he’ll want to play for any other team than the Seattle Seahawks,” Robinson explained on the NBC Sports Northwest podcast Talkin’ Seahawks.

Robinson went on to note that Lynch still feels like he has something to prove on the football field. He also emphasized that Lynch simply missed football and was motivated to return to the Seahawks.

“I knew he was going to get bored, I just didn’t know when,” Robinson noted on the Talkin’ Seahawks podcast. “…He said, ‘Mike, I love this game and I miss it. And I need to prove not just to myself, but to the rest of the football world that this game needs me and I belong.’ I was happy for him coming back.”

Seahawks head coach Pete Carroll briefly discussed Lynch’s future with the team during his final press conference of the season. Carroll admitted that he was unclear on what Lynch would do next season.

“He’s going to go home and think about it,” Carroll noted, per Seahawks.com. “We were all very fortunate to have a chance to see Marshawn come back and play again. To score four touchdowns in the last three weeks, it was pretty cool. Just being Marshawn down inside the 5-yard line, he was nails. I don’t know, I don’t know what he’s going to do. I don’t think he knows yet.”

The Seahawks could have a crowded running back room in 2020. Seattle is expecting Chris Carson and Rashaad Penny to both make complete recoveries from injury. It would also be surprising if the Seahawks did not either draft or sign another running back in free agency.

If Lynch opts to return, this makes for a crowded depth chart at the position. It is still not out of the question as Lynch is likely best suited for a complimentary role at this stage in his career. Lynch did his best work inside the red zone in his return to the Seahawks.

One Analyst Suggests That Lynch Could Transition to Fullback

710 ESPN Seattle’s Jake Heaps offered a unique suggestion on how the Seahawks could utilize Lynch moving forward. Heaps noted that Lynch’s physicality makes him a fit at fullback for the remainder of his NFL career.

“Marshawn Lynch being a fullback, I think, would be a lot of fun,” Heaps said, per 710 ESPN Seattle. “And the reason why this is even an interesting question is because we know of Marshawn and his love for contact. And he has said before that he doesn’t just like to hit people a little bit or even once, (but over and over again) … That is a fullback mentality.”

It is an interesting suggestion but Lynch’s physicality is most evident when he has the football. It is unclear if Lynch would thrive in a role where he is primarily utilized as a blocker. Fans should not expect a decision on Lynch’s future any time soon as there has not been a timetable released on when the Seahawks legend will announce his status for the upcoming season. 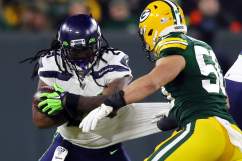