Patrick Mahomes does not have a wife but has been dating longtime girlfriend Brittany Matthews since high school. The couple seems to be getting the question a lot so Matthews took to Instagram to inform fans that they would get married on their own timeline. Matthews addressed the marriage topic in April of 2019 when the couple was celebrating their anniversary.

“7 years, the greatest 7 years with you! Lots of life changes, lots of growing, lots of surprises, lots of memories! Cheers to a lifetime with you❤️ P.s- to everyone that’s gonna ask when we are getting married, the answer is whenever we want??,” Matthews noted on Instagram.

The couple is now close to celebrating their eighth anniversary but the response still rings true. Matthews is a staple at Chiefs games and was in Miami rooting on her favorite quarterback in the Super Bowl. Matthews and Mahomes’ brother, Jackson Mahomes, are constantly giving fans an up-close look at what game day life is like.

Matthews continued her tradition of live-tweeting games during the Super Bowl. Mahomes’ girlfriend let her followers know that they better be rooting for the Chiefs in the Super Bowl.

“ITS SUPERBOWLLL DAYYYY??…If I know you, you better be a chiefs fan today ???,” Matthews tweeted prior to the Super Bowl.

We fought for our right to PAAAARTYYYY??? #chiefskingdom

It will be an offseason full of celebration for Mahomes and the Chiefs. Mahomes found Matthews after the game and two shared a celebratory kiss. Matthews took to Instagram to celebrate the biggest moment of her favorite quarterback’s career. Matthews channeled her inner Travis Kelce in her first post after the Super Bowl win.

“We fought for our right to PAAAARTYYYY??? #chiefskingdom,” Matthews noted on Instagram.

“You & this team deserved this?❤️,” Matthews said on Instagram.

You & this team deserved this?❤️

Mahomes is not the only athlete in the family as Matthews played soccer in college. Matthews played at UT-Tyler while Mahomes was tearing up Big 12 defenses at Texas Tech. She went on to play professionally in Iceland before starting her own personal training business after Mahomes made it to the NFL.

“We feed off of each other,” Matthews noted, per UT-Tyler Athletics. “He’s an incredible leader and player and I’ve learned a lot from him. We give each other advice and he is always being positive with me to motivate me when I need it. I’m constantly letting him know that he’s not the only one breaking records. We’re having a great time with everything that is going on in our lives. He’s doing big things right now and so I am.”

Mahomes called Matthews his “No. 1 fan” noting her support “means the world to me.”

“She has been supportive of me in whatever I do even before I played quarterback in high school,” Mahomes told UT-Tyler. “She has been my No. 1 fan since the beginning. Her support means the world to me.”

While Mahomes is on the football field, Matthews is in the gym working with clients. Matthews explained her philosophy for personal training on her website for Brittany Lynne Fitness.

As many of my clients will tell you, staying positive and committed to my workouts can have a wide variety of benefits, from sleeping better and being less injury prone to experiencing a true feeling of wellbeing, both physically and mentally. Consistency is key. Don’t let anything get in your way! 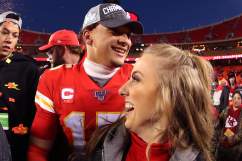