One thing is clear: the Cleveland Browns are interested in Jadeveon Clowney. The question remains if Clowney is interested in suiting up for the Browns, even if they offer him the most money.

The Browns have been in hot pursuit of Clowney this offseason. The former No. 1 overall pick was one of the biggest free agent names, but has been unable to secure the desired dollar amount he had in mind.

If there’s a team that has come closest to his demands, it’s the Browns, which ESPN NFL Insider Adam Schefter broke down during an appearance on ESPN Cleveland on Wednesday.

“I think they’ve been the most aggressive team with him financially. And I just think he has balked at going to Cleveland for whatever reason. I think he’s been hesitant to go because if he wasn’t, he would have gone already because it’s the most money,” Schefter said on the radio. “It’s the richest offer on the table and he hasn’t taken it. So why is that? I don’t know. Is that not wanting to be in that city? Is that a lack of belief in the organization? I don’t know what it is. But there’s no doubt that Cleveland has offered the most money to date. For whatever reason he has not been willing to take it so far. That doesn’t mean that it couldn’t change, but it hasn’t change just yet.”

Myles Garrett a Reason for Jadeveon Clowney to Like Cleveland

The Browns do not have the best reputation among franchises in the league. Since returning to the NFL in 1999, the franchise has seen just two winning seasons and has struggled mightily of late. First-year head coach Kevin Stefanski and general manager Andrew Berry have a chance to turn things around and end the team’s drought of 17 seasons without a playoff berth.

However, Myles Garrett is a huge reason for Clowney to come to Cleveland. Garrett was on track for a second Pro Bowl season with 10 sacks but was hit with an indefinite suspension from the NFL after he ripped off the helmet of Rudolph and hit him over the head with it. Garrett sat out the final six games of the Browns season with the suspension, but was reinstated this offseason.

.@AdamSchefter just told us that the Browns have offered Jadeveon Clowney the most money and he would be here already if he wanted to be in Cle.

Playing opposite of Garrett would surely free up Clowney to rack up some nice numbers, with offenses having to decide who they wanted to double-team.

Browns Viewed as Front-Runners for Clowney, Per Insider 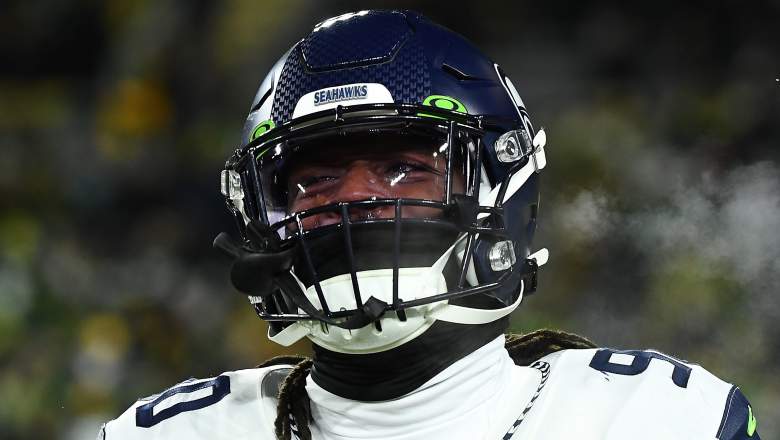 GettyJadeveon Clowney has kept the NFL waiting on his free-agent decision.

The Browns not only have interest to add Clowney but they also have the funds. The Browns have the highest remaining cap space, according to Sportrac, with just over $37 million. The team also has a disposable contract in veteran defensive end Olivier Vernon.

Vernon is owed more than $15 million next season — the highest among Browns defenders — but none of it is guaranteed if they cut him this offseason. The team could give Clowney the money he is seeking, which is reportedly between $17-20 million per year (h/t ESPN) on a short-term deal, and not see too much of an impact on their cap space.

Last year with the Seattle Seahawks, Clowney suffered a core muscle injury in Week 10, which he had surgery on this offseason. He played in 13 games — starting 11 — notching just three sacks and 31 tackles.

According to Charles Robinson of Yahoo Sports, the Browns are working on Clowney’s timeline as he weighs his options.

“Look, you’re on Clowney’s schedule because Clowney is sitting here,” Robinson said on The Pat McAfee Show. “I’ll tell you what his thought process is right now. Do I do a one-year deal? Because I feel like I did a one-year deal last year essentially finishing out the move to Seattle last year. I did a one-year deal, the prove-it deal. It didn’t work out. My sack numbers weren’t great, the pressures weren’t great. I wasn’t always a 100 percent healthy and teams are all sitting there staring at me going, ‘Hey man, when are you going to have the pop season. When are you going to have the 12 to 14, 15-sack season? You haven’t done that. We’re not going to pay you like you’re a 15-sack guy. You want $20 million, that’s a 12 to 15-sack guy every single year.'”