The Cleveland Browns have been in hot pursuit of big-name free agent Jadeveon Clowney, but the Pro Bowl pass-rusher has reportedly not been to sweet on the idea of joining the long-struggling AFC North squad.

ESPN NFL insider Adam Schefter reported that the Browns have been the most aggressive team financially when it comes to Clowney, who early on in free agency was seeking an annual average value of around $20 million per year.

Last year with the Seattle Seahawks, Clowney suffered a core muscle injury in Week 10, which he had surgery on this offseason. It slowed his production and he played in 13 games — starting 11 — notching just three sacks and 31 tackles.

McAfee has had a hard time believing the latest report from Schefter that Clowney spurned the Browns’ big offer.

“I don’t think he turned down a multi-year, big, big contract from the Browns,” McAfee said during his show Thursday. “People are saying ‘Oh, he didn’t want to go to Cleveland’ and I assume a lot of people in Pittsburgh are celebrating this, that someone turned down a deal strictly because they didn’t want to go to Cleveland or something of that nature. If you are Jadeveon Clowney, and a team that is spending money and rebuilding a culture, and you don’t have a multi-year, big offer from anybody else — I don’t know how you turn that down. I do not know Jadeveon Clowney, but I’m assuming he did not turn down a multi-year, big deal.”

McAfee speculated that the latest report were rumors spread with intentions to sway the market by Clowney’s camp — or someone else.

“Who would start these rumors? Would it be Jadeveon Clowney because he wants people to know people are interested in him,” McAfee pontificated. “I have no idea.” 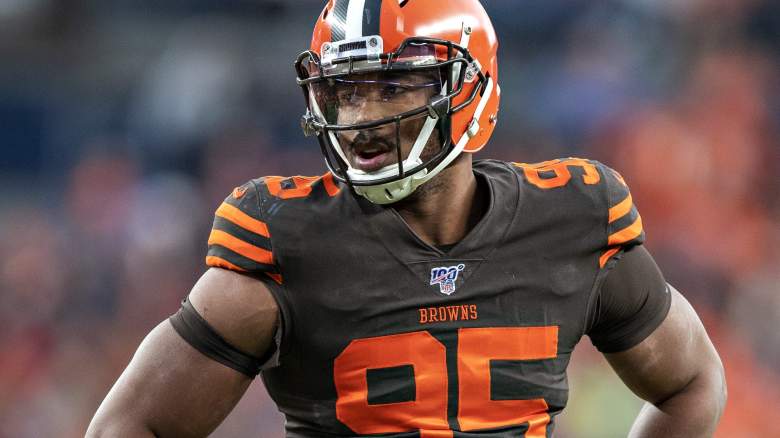 Browns defensive coordinator Joe Woods understands the impact Clowney can have on a game and has a large amount of respect for him. However, Woods is not getting ahead of himself and reacting to rumors. The first-year Cleveland defensive coordinator is firmly focused on the players the Browns have under contract.

“Obviously, he has been a really good player in this league, a great pass rusher when he was in Houston in Seattle,’’ Woods said on a Zoom call Thursday. “Just really affects the game. To be honest with you, that is really a question you have to ask (GM) Andrew (Berry). I read the articles, too. I see him linked to us, Tennessee and see all these teams. Really, right now, I am really focused on coaching the guys we have.”

Luckily for Woods, one of those players is Myles Garrett, a Defensive Player of the Year candidate in his own right.

Garrett was on track for a second Pro Bowl season with 10 sacks last year but was hit with an indefinite suspension from the NFL after he ripped off the helmet of Steelers QB Mason Rudolph and hit him over the head with it. Garrett sat out the final six games of the Browns season, but was reinstated this offseason.

“Myles has the right mindset in terms of wanting to be MVP and all of that, but we just need him to be the best player for us that he can be, and whatever happens, happens,” Woods said. “Right now, I think he’s in a good place. As a young player in this league, you go through a lot of different things so I definitely think he’s going to learn and grow from the situation that happened last year.”