Remembering Michael Jordan with the Wizards

With The Last Dance concluding, it’s an opportunity to look back and remember that Jordan’s career didn’t end with that 1998 championship. Instead, M.J. added another chapter to his career in Washington with the Wizards. Lets’ take a look at his time in the nation’s capital:

January 2019: Jordan was announced as a minority owner of the Wizards in January of 1999, owning a 10% stake in the franchise. The former Bulls great would become the team’s director of basketball operations. The team finishes the year 29-53.

2000-2001 Season: Jordan’s first full season as an executive was no success from an oncourt standpoint. The club went 19-63, though Jordan’s presence did increase the attendance in Washington.

September 2001: Jordan announces that he’ll be joining the Wizards as a player. Jordan donated his salary to help those impacted by the 9/11 terrorist attacks.

To play again, Jordan has to divest his shares in the team. He sold his 10% stake and re-signed as the team’s director of basketball operations to take the court alongside many of the players he had hand-picked to be there.

He was no longer the most dominant player in the league, though he was still a top player. Jordan broke the 30,000-point mark during his first season in Washington and became the oldest player (38) to score over 50 points in a game, as he notched 51 in December of 2001 against the Charlotte Hornets.

Watching Michael With the Wizards 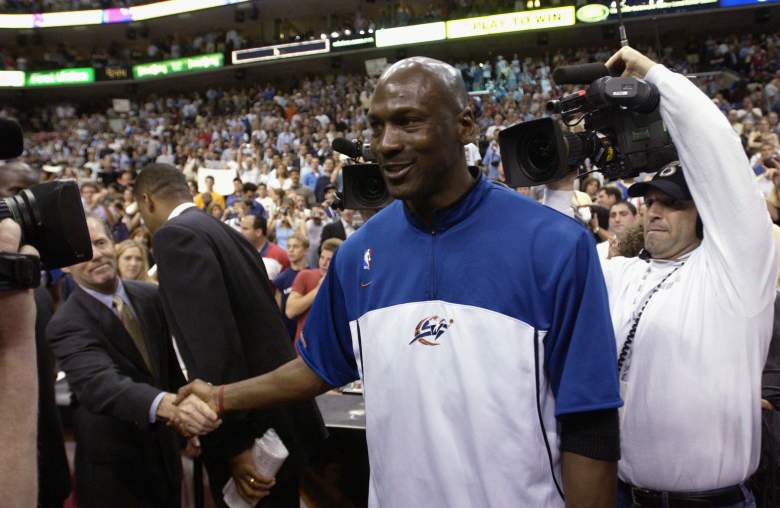 2001-02 Season: Jordan joining the Wizards at the end of his career had many believing that the GOAT would tarnish his legacy, though he was still an impressive player on the court. He still had “it,” as Bill Simmons wrote back in 2001.

I’ll go this far: You could drag somebody off the street — let’s say, a homeless person who doesn’t follow sports and couldn’t pick MJ out of a police lineup — bring him into the arena before a Wizards-Celtics game, sit him somewhere close to the floor, have him watch the layup lines and ask him, “Which person stands out?” And he would pick Jordan. He just would. There’s something about him, an instinctive posture that says two things: “I know everyone’s looking at me right now … and they should be.”

He averaged 22.9 points, 5.7 rebounds, and 5.2 assists as a 38-year-old during his first season in Washington. He made the All-Star Team as a starter.

September 2002: While Jordan had to renounce his title in the team’s front office as a result of coming back to the court, he remained involved in roster decisions. Jordan had a hand a six-player trade that brought Jerry Stackhouse to Washington. Stackhouse, initially, was not thrilled about the move.

“I’m just disappointed … because I have to leave my home,” Stackhouse said (via ESPN in 2002). “I have to leave a fan base that has grown with me since I’ve been here and who have been just unbelievably great for me. It’s not easy, but at the same time it comes with this business and I understand that.”

The club sent out rising prospect Richard Hamilton as part of the package for Stackhouse, who would start the year playing ahead of Jordan, as his Airness came off the bench as the Wizards’ sixth man (the experiment only last 15 games, as Jordan would return to the starting lineup a month into the season).

2002-03 Season: It was widely known that this would be Jordan’s final campaign in the NBA, as the 6-time champion would retire (for the third and final time) in 2003 at the end of the season.

Despite dealing with knee woes, Jordan made the All-Star team again during his second campaign in Washington. While his popularity certainly played a role, he put up worthy numbers. He averaged 20.0 points, 6.1 rebounds, and 3.8 assists per game. The 2003 All-Star Game was Jordan’s 14th appearance, which was a record at a time (Kobe Bryant later broke the record).

Jordan dropped 43 points against the Nets late in the season, becoming the only player 40 or older to score 40 or more points. His final game, on April 16, 2003, was a 20-point loss to the Allen Iverson-led Sixers. Jordan scored 15 points in the game the loss, which brought Washington to 37-45 on the year.

May 2003: at-the-time Wizards owner Abe Pollin fired Jordan, which ended his time with the franchise. Jordan’s assembling of the team was the reason why he was dismissed, as they couldn’t find success even with Jordan adding himself to the mix. Jordan, of course, later found ownership of an NBA team again. In 2010, he bought the Charlotte Bobcats, which have since been re-named the Hornets.