In a candid and emotional interview, new Chicago Bears linebacker Robert Quinn spoke with the media via Zoom Thursday, and the nine-year veteran was visibly frustrated by the nation’s — and the NFL’s — unhurried response and lack of action when it comes to the issues of police brutality and systemic racism. Quinn, who signed a five-year, $70 million contract with the Bears this spring, has previously spent time with the Cowboys, Rams and Dolphins.

Quinn didn’t protest while with Dallas last season, but he did raise a fist in the air in support and solidarity with those protesting racism when he was with the Dolphins and Rams. He said he wasn’t yet sure how or if he’ll be protesting during the upcoming season, but he did seem to feel very comfortable speaking out while being himself with his new organization — which he also said some pretty great things about. 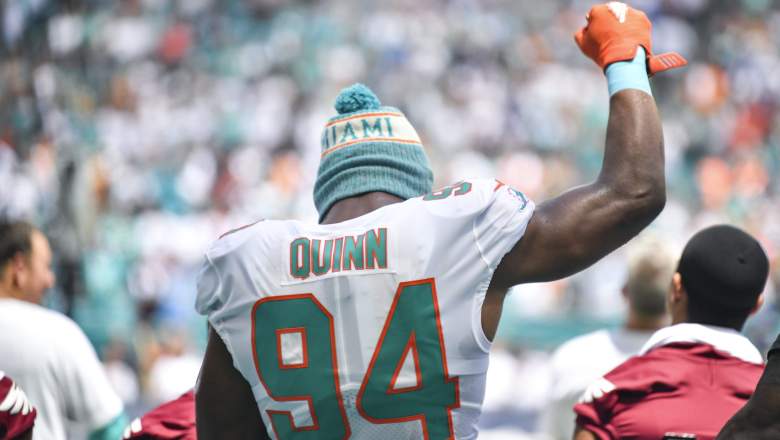 GettyRobert Quinn raises his fist during the National Anthem when he was with the Miami Dolphins. (Photo by Mark Brown/Getty Images)

When asked his thoughts about protesting and issues of racism and police brutality, Quinn got very real, very fast. “I look myself in the mirror every day and I see people like me being harassed for absolutely no reason,” Quinn said, visibly emotional. “To me, it’s very frustrating, because there’s been so many lives lost through the years that people have just swept under the rug, and I’m sorry, it’s frustrating.”

Quinn also noted his confusion as to why it has taken so long for racism and police brutality to be addressed by the league and the country. He mentioned Colin Kaepernick essentially losing his job over protesting these issues, and he is having a difficult time reconciling it all. He also took a veiled shot at President Donald Trump and his plans to build a wall between Mexico and the United States. “When Kaepernick lost his job, and people said he was disrespecting the flag, [it] completely ignored the message of police brutality and people being mistreated,” he said.

“It’s still the same message we’re protesting today,” Quinn continued. “If you want to be honest, look at American history … What we call American history, people with darker colored skin have been mistreated, Natives have been pushed out, Africans have been enslaved, they’re trying to put a wall around Mexico, I mean, let’s just call a spade a spade, you know what I mean? It’s nothing to sugar coat, let’s just be honest.”

Quinn is Glad to Be in Chicago Right Now, However…

“There’s not going to be change overnight,” Quinn said, but he did get visibly excited when discussing his new team, and the defense he has joined.

“It’s welcoming and heartwarming to know you have an organization that supports you and supports the situation,” Quinn said about the way the Bears have handled current events. Quinn is also excited to work with Chuck Pagano, Khalil Mack and company, and he’s ready to contribute in any way he can. “You can tell the team is full of personality,” Quinn said with a grin.

Quinn joins what is a steadily growing list of Bears players who have gotten incredibly candid when it comes to talking about racism and police brutality. Akiem Hicks gave one of the more honest and eye-opening interviews you’ll ever see last week, when he confessed he didn’t kneel in protest in 2016 out of fear of losing his job. Veteran linebacker Danny Trevathan also shared some powerful thoughts about his experiences as a black man living in America, and new safety/special teamer Jordan Lucas says he “110 percent” plans on kneeling during the anthem this upcoming season.

You can watch Quinn’s full Zoom conversation below.