Austin & Ally — which was created by Kevin Kopelow and Heath Seifert — aired for four seasons on the Disney Channel with a total of 87 episodes. The series was so popular, it earned three Kids Choice Awards in 2015.

If you are trying to watch Austin & Ally online, you’re in luck. With the arrival of Disney’s new subscription video service, which includes a variety of Disney Channel original series and movies, you can now find Austin & Ally streaming.

How to Stream ‘Austin & Ally’ – Exclusively on Disney+

Austin & Ally is one of the top live-action Disney shows that will be streaming exclusively on Disney’s new subscription streaming service, Disney+.

You can sign up for a 7-day free trial of Disney+ HERE, which will allow you to stream Austin & Ally and hundreds of other movies and shows on your computer, phone, tablet, smart TV or streaming device. If you extend past the free trial, the service costs $6.99/month. You may also opt for this discount bundle of Disney+, Hulu and ESPN+ for $12.99/month.

When Was It On TV: December 2011 to January 2016
Creators: Kevin Kopelow, Heath Seifert
Starring: Ross Lynch, Laura Marano, Raini Rodriguez, Calum Worthy
Rating: TV-G
Synopsis: A confident musician and his quiet singer-songwriter friend try to make it big in the music industry while juggling school, their romantic relationships, and their friendships.

Austin & Ally is centered around Austin Moon (Lynch), a musician who loves the spotlight, and Ally Dawson (Marano), a smart and talented singer-songwriter who suffers from stage fright.  Along with their best friends Trish (Rodriguez) and Dez (Worthy), the duo tries to make it big in the music business.

How Many Seasons of ‘Austin & Ally’ Are There?

Here’s a breakdown of each season:

In Season 1, Austin and Ally meet for the first time, when Austin unknowingly steals one of Ally’s songs. When the misunderstanding is cleared, Austin asks Ally to become his partner, and the two become friends. Trish joins them as manager, while Dez creates and directs Austin’s music videos and Austin eventually lands a record deal with Jimmy Starr.

In the second season, after Ally performs a duet with Austin, she manages to quell her stage fright. Austin does well, and gets to goes on tour and Ally lands a record deal with  with Ronnie Ramone.

Season 3 starts with Austin still on tour, with Ally eventually coming to join him for the last half of it. But as Ally’s career begins to take off, Austin’s label tells him to stay away from her. Instead of ditching his friendship, Austin drops his record deal. The two musicians confess their love for each other, and Austin joins Ally as she heads out on tour.

In the final season, Austin, Ally, Trish and Dez get together after Ally’s tour, and start a music school. With Trish’s management skills, Dez’s creativity, and Austin and Ally’s musical talent, the school becomes a huge success.

For Austin & Ally fans, every episode feels special, but there are some memorable moments throughout the series that stand out.

Here’s a list of the best Austin & Ally episodes:

In “Albums & Auditions,” Ally gets accepted to a music school in New York, and despite being excited about it, she isn’t sure she wants to attend the school and leave her friends behind.

In the final episode of Season 3,  Austin’s music label tells him that he can’t be seen with Ally. This puts him in a tough place, and it’s endearing to see him sacrifice his career for his love and friendship with Ally. 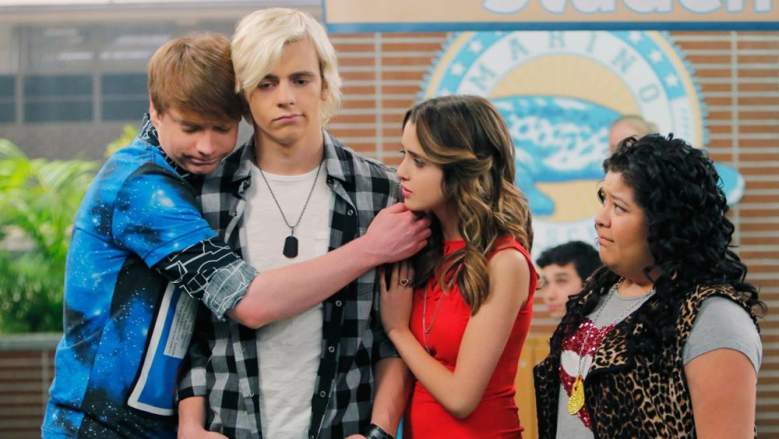 After the show ended, the cast members of Austin & Ally were featured in a number of other popular projects.

Here’s a breakdown of the cast and where else you can catch them:

Marano takes on the role of Ally Dawson, the quiet, yet fiercely talented singer-songwriter who is trying to overcome her stage fright. The actress’ most recent notable role was that of Celia Lieberman in the Netflix rom-com, The Perfect Date.

Rodriguez steps into the role of Trish de la Rosa, Ally’s temperamental,  yet caring best friend, who becomes Austin’s go-getter manager. The actress has been featured in a number of shows in the last few years, including Mutt & Stuff, Vampirina, and Bunk’d. She also played Paul Blart’s daughter Maya in Paul Blart: Mall Cop.

Worthy plays Austin’s best friend, Dez, a creative, quirky, and slightly dense film director. Worthy has been in a number of popular shows since Austin & Ally ended, including Lost Generation, American Vandal, and Hulu’s Emmy Award-nominated drama, The Act, in which he played Nick Godejohn.

Who Are the Top Guest Stars on ‘Austin & Ally’?

The show was centered around the main cast, and unlike other Disney Channel series, it did not feature many celebrity cameos.

There aren’t many to list, but here are a few of the most notable Austin & Ally guest stars:

Known for his recurring role on The Fosters and his Netflix film, To All the Boys I’ve Loved Before, Noah Centineo is now referred to as the internet’s favorite boyfriend. But long before that, he played Ally’s crush, Dallas on Austin & Ally.  The actor appears in Episodes 3, 8, and 10 of Season 1.

Becky G as Herself

Pop star Becky G made an appearance in Episode 10 of the final season, titled”Dancers & Ditzes.” On the episode, she played herself, and performed her single, “Can’t Stop Dancing.”

Dwayne Wade as Himself

In Season 3, Episode 14, professional basketball player, Dwayne Wade guest stars as himself. In the episode, he turns up as Dez’s distant cousin who is also a Austin superfan.

Who Are the Writers & Creators Behind ‘Austin & Ally’?

Austin & Ally was created and written by Kevin Kopelow and Heath Seifert, who also served as the show’s executive producers.

Here’s a breakdown of the crew behind the magic:

Kevin Kopelow is the co-writer and co-creator of Austin & Ally. His TV writing/producing credits include Cousins for Life, Kenan & Kel, and Good Burger.

Heath Seifert is the other co-writer and co-creator of the series. His TV projects include Jonas, Kenan & Kel, and Cousins for Life.

Shelley Jensen served as director throughout the four seasons of the show. His other notable directorial credits include Dog with a Blog, Liv & Maddie, and Best Friends Whenever.

Before Craig Wyrick-Solari produced Austin & Ally, he worked on shows like Coach, The Wayans Brothers, Odd Man Out, The Closer and A.N.T. Farm.

Austin & Ally was popular among audiences and critics alike. “The story is rooted in a fantasy-filled and fairly sterile view of teen life,” wrote Common Sense Media‘s Emily Ashby. “But it does present a healthy boy-girl friendship that encourages each partner to expand his or her horizons and isn’t encumbered by the pressures of a developing romance.”

Where ‘Austin & Ally’ Ranks in the Television Pantheon

With it’s catchy music, talented cast, and upbeat tone, Austin & Ally has become one of the most loved Disney Channel original series. Entertainment Weekly ranked the show at number 19 on its list of The 25 Best Disney Channel Original Series of All Time, and noted that its “winsome leads, infectious soundtrack, and goofy-but-lovable sidekicks helped deliver four endearing, sweetly funny seasons about how sometimes, you just can’t do what you want without someone else.”

The series’ theme song, “Can’t Do It Without You,” was performed by Ross Lynch and was featured at the beginning of each episode.

From 2013 to 2015, Ross Lynch won three Kid’s Choice Awards for Best TV Actor for his role of Austin Moon on Austin & Ally. The award, which is determined by fan votes, proved how popular the cast was among audiences.

As reported by In Style, in 2015, Laura Marano (who plays Ally Dawson on the series) signed a record deal with  Taylor Swift’s former label, Big Machine Records.

Laura Marano made a brief appearance on the popular Showtime series, Dexter, where she played a young version of Dexter’s sister, Debra.

4. The Soundtrack Was A Hit

The show released three albums over its four season run. The first album, titled Austin & Ally, was a huge hit and made its way to number 27 on the Billboard 200 in 2012.

5. Ross Lynch Can Play All The Instruments

In an interview with Variety, the show’s creators Kevin Kopelow and Heath Seifert mentioned that Ross Lynch (who plays Austin on the series) fit perfectly into the role because of his immense musical talent. “In the pilot script, we mentioned that Austin can play every instrument ever,” they revealed. “And then Ross came in, and he really could.”