When Pyles was 14, she was part of a girl group for Nick Cannon called “Aaron Fresh And The School Gyrls” and Justin Bieber was working on the movie they were working on. They began to hang out then and their friendship just continued to grow.

2. Bieber Took Her to the Bahamas Last Month

Recently, Bieber took Pyles and a few friends on a trip to the Bahamas. Watch Pyles talk about it in the above video.

This place is literally heaven pic.twitter.com/0GkZtDxW3N

3. Jacque Rae Pyles Says She Has a Boyfriend

Well, maybe her pet dog isn’t the boyfriend you were hoping to hear about. Actually, Pyles says she’s completely single. Though Pyles says she’s single, she does an interview with E! where she tells them her ideal qualities in a boyfriend. She’s then asked if Justin Bieber has those qualities and she replies with a “yes.” To end things, the interviewer asked Pyles if she has plans to meet up with Justin soon and she said “definitely.”

4. She’s A Music Artist Herself

Check out Pyles in the music video above. It’s a pretty awesome song and she looks great in it.

Pyles says she’s currently working on some projects, but she’s not allowed to say which ones just yet. Right now she is totally focusing on acting.

Cooking for my mama pic.twitter.com/eyRAGbPt1c

The girl also loves to cook. 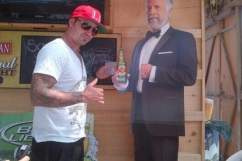