Michael Carbonaro will blow your mind. He’s a magician’s magician, a prankster like you’ve never seen, and he’s easy on the eyes. What’s most important is that Carbonaro knows how to keep a secret … He tells us:

Rule number one in magic is never reveal a secret. I never reveal that I’m a magician because I feel that’s kind of giving away a secret.

We got a chance to catch up with Carbonaro this week and he gave us a glimpse into his fun-filled life of magic.

1. He’s the Master of The Carbonaro Effect

In case you haven’t seen it, The Carbonaro Effect is a new show on TruTV that showcases the magical pranks of Michael Carbonaro. Carbonaro is a talented magician, prankster, and actor, which makes his show truly come alive. Have a look at a clip from the show in the above video.

When it came to coming up with a title for the show, Carbonaro said:

We didn’t know what kind of show we were making … Was it a comedy show, a prank show, a magic show? I could never really answer that question. I thought, “I’ve done TV, stand-up comedy, and magic,” and this show puts them all together at ones to create its own effect. 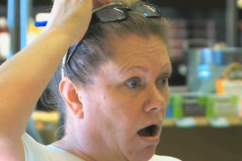 2. The Magic Castle Has Been a Huge Support System for Carbonaro

The World Famous Magic Castle in Los Angeles has truly been a great support system for Carbonaro. While one might think that the competition aspect would get in the way among the magicians, it’s actually the opposite. In the above video, you’ll be taken on a tour inside the exclusive Magic Castle. Around the 1:53 mark is when things really pick up.

Carbonaro has said that with the success of the show, he’s overwhelmed with support from the magic community.

3. You May Have Seen Him on The Tonight Show With Jay Leno

Last night, Jay Leno invited me back to the show one last time, for a glimpse at some of our favorites: https://t.co/ezpbxvF4nx

When Carbonaro moved to Los Angeles almost five years ago, he was worried about disconnecting himself from magic, but just the opposite happened. Carbonaro was a New York boy who appeared in off-broadway shows, corporate events, and regular magic shows. He then “took the dive” and moved to Los Angeles. Never in his wildest dreams would he imagine getting to work with Jay Leno, who he describes as the “greatest guy in the world.”

Throughout the run of The Tonight Show With Jay Leno, Carbonaro appeared and got to do what he does best … hidden-camera magic.

Jay Leno is the greatest guy in the world, willing to give a no-name guy a chance to try something brand new. He just trusted me to create new ideas and just run wild. The Tonight Show became my playground for hidden camera magic and Jay actually called me personally to congratulate me when I got my own show. He’s just a great guy.

4. Originally, Carbonaro Was Into Horror Movies, Not Magic

Carbonaro’s first love growing up was actually horror movies and special effects. He really thought he’d become a makeup artist because he loved to transform things and create monsters. He kills it on Halloween, by the way. In any event, when he would go to buy makeup for these projects, these supplies were sold in the same stores as magic goods. When Carbonaro started looking at some of the magic items, he realized it was taking special effects to a whole other level.

Yes, it’s true. Carbonaro has a sickness … He has a “certifiably insane love for cats” and calls himself a shut-in cat lady. He’s also a coffee connoisseur, which isn’t quite as strange as his feline obsession. Perhaps we’ll see some of Carbonaro’s cats sometime on The Carbonaro Effect … They did after all just get picked up for 13 new episodes.

In addition to working on the show, Carbonaro will be performing in Las Vegas soon and will be popping up in New York this July 2014.

According to WhosDatedWho, Michael Carbonaro is currently single.

Read More
Celebrities, Magic, Michael Carbonaro, Reality TV, TV, Twitter
Michael Carbonaro is the magical prankster taking illusion to a new level. Check out our interview with Carbonaro and all about The Carbonaro Effect.