Dwayne “The Rock” Johnson made a triumphant comeback to the WWE and electrified the crowd while he was there. Now the he’s taken a hiatus from the squared circle, Dwayne is ready to take over the silver screen once more in his upcoming film.

This time, he’s sporting some hair and a set of Greek armor as he plays the role of a courageous demigod – Hercules! Before you head out to the theaters and watch Rocky smash some CG beasts, we’re going to make sure you’re knowledge of this film is higher than most.

1. This Film Adaptation is Based on a Graphic Novel

2. The Director Behind Such Films as the Rush Hour Series Also Directed/Produced This Film

The film also includes a bunch of fellow producers and executive producer that have worked alongside Ratner during the film’s production:

3. The Rock Isn’t the Only Wrestler Who’s Starring in This Film

Dwayne “The Rock” Johnson is handling the lead role of Hercules, who is tasked with killing a tyrannical warlord on behalf of the King of Thrace and his daughter. Dwayne’s cousin, Tamina Snuka, will be making her feature-length film debut. Dwayne took the time to explain Tamina’s tough life trials and tribulations that strengthened her and made her the woman she is today via an Instagram post.

He made sure to write the following comments on behalf of his beloved cousin and fellow WWE wrestler:

10 years ago my cousin, Sarona Snuka divorced, decided to go back to college to complete her education and be a great example for her two beautiful little girls she was raising – all while working as a janitor. Today, she’s one of the WWE’s most successful Divas, a proud (and hot;) single mom who will be making her big screen debut w/ me in HERCULES and more importantly, a shining example to women of all ages around the world that thru endless hard work you can achieve anything when you make up your mind to achieve it. #Inspiration #SweatEquity #Respect #WeAlwaysActSillyAsHell

4. Dwayne Johnson Had to Endure a Incredibly Grueling Workout Routine to Prepare for This Role

In order to fully prepare for his role as the Greek demigod, Dwayne had to undertake an even tougher training routine not unlike his usual workout regimen. Dwayne went on to provide some comments on how hard his preparation for the film turned out to be:

I trained and worked harder than ever for 8 months for this role. Lived alone and locked myself away (like a moody 260-lb. monk) in Budapest for 6 months while filming. Goal was to completely transform into this character. Disappear in the role. Press journalist asked me today, with the mental & physical toll the role had on me, would I do it again? Not only would I do it again.. I’d do it fucking twice.

5. There are Two Other Films Focused on Hercules Besides This One

Dwayne’s interpretation of Hercules isn’t the only film about this Greek hero to release in 2014. The Legend of Hercules, starring Kellan Christopher Lutz in the lead role, and Hercules Reborn, starring former WWE wrestler John Hennigan, also deal with Hercules’ triumphant tales. 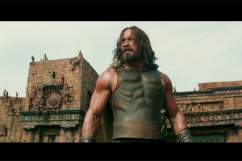