This Friday, Nine Lives is released into theaters nationwide. Though the film is about Kevin Spacey's mind getting trapped in a cat, he's far from the only star in the movie. One of the other main roles is portrayed by a favorite amongst teenagers, Robbie Amell. Star of the short-lived CW show The Tomorrow People and cousin of Stephen Amell of Arrow, Robbie Amell's star has been on the rise for some time. He has also played a recurring character on another CW show, The Flash has appeared in comedy films like The DUFF, and teenagers from the late 2000s might even remember him from the Nickelodeon show True Jackson, VP. Should this family film do well, Amell's star will be more on the rise than ever, someone who can potentially carry a major motion picture.

Amell's fiancee, Italia Ricci, is no slouch either in the acting department. Once the lead in an ABC Family show called Chasing Life, Ricci currently recurs on Supergirl. Their relationship predates roles in major television shows and motion pictures, and is among the stablest young Hollywood romances at the moment, if not the stablest. (Getty) 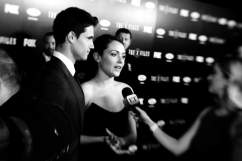