According to his Discovery bio, Kenny was expelled in high school and given an ultimatum by his dad, Gary: go back to school, or get a job fishing. He chose fishing. Kenny worked with his father at first, but then went to the Retherford's after getting in too many fights with daddy dearest. This season, Kenny is back working with his father to prove he has what it takes to eventually take over the family business. Kenny will be in charge of the Redeemer this season. He has a 4-year-old daughter, Alexia, at home. (Facebook/KennyRipka) 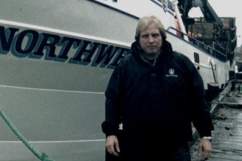