The season 7 series finale of Pretty Little Liars is here, which means we will soon find out the identity of villain A.D. In honor of the occasion, read on for all the spoilers and sneak peeks we could find to get you ready for the episode. Read on below.

– In photos from the episode, we see Aria in a wedding dress and the Liars in what appear to be bridesmaid dresses. We may get to see Aria walk down the aisle.

– Show-runner Marlene King revealed to Entertainment Tonight that little clues about A.D.’s identity have been dropped in the last 10 episodes of the series. King explained:

We’ve dropped a lot of Easter eggs intentionally into them because we wanted fans to have a really good chance to figure this out and to be right. So the A.D. reveal is very important but then the understanding of [why] is equally as important. That’s why [the finale] is two hours, so the fans and the Pretty Little Liars can all process it all at the same time.

– Viewers will get to see some of the Liars’ parents again in the finale.

– The Spencer Twin Theory is at an all-time high. Could Spencer have a twin who is A.D.?

– Paige may return for the finale episode. Marlene King also says that:

[Jason DiLaurentis] is not going to be in the finale. There are a couple of actors that we really tried to get but either they were booked on other shows and legally they can’t come back to us and he’s one of those. But somebody we tried all season to we get back who is in the finale and on another show is Melissa, Torrey Devitto, so we were really excited about that.

I knew from the beginning of the season that I wanted this to be a two-hour finale. This last episode gave the Liars a significant amount of closure; they won the game, and it looks as if A.D. is leaving town. So the finale is structured as a two-hour movie. It’s paced like a feature film, not the way we do regular episodes. I don’t want to give away too much in terms of how [A.D.’s identity] is revealed, but that pacing will feel different and feel special.

– Emily and Alison have the most “shocking” moment together in the finale as a couple. We will find out the father of Emison’s baby.

– There will be multiple sex scenes in the finale.

– Show-runner King says that Toby has changed the most since the time jump. Do you think he has anything to do with A.D.?

– There is a shooting in the finale episode.

It’s like a bonus. Although this show ends, this world continues. The mythology of this town will always go on. It’s not going to end with Pretty Little Liars. 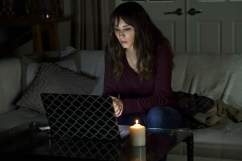