Getty Chris Hemsworth plays Thor in the Marvel movies, but he is not actually in Spider-Man: Homecoming.

Spider-Man: Homecoming is filled with more Easter eggs than you can count. One of them is Happy Hogan’s line about “Thor’s Magic Belt.” When he’s loading up the plane with artifacts to take from the Avengers Tower to the new headquarters glimpsed in Captain America: Civil War, he mentions the belt while going down the manifest.

The belt Happy is referring to is called “Megingjörð,” which literally means “power belt” in Old Norse. The belt is one of Thor’s three main possessions, along with his hammer Mjölnir and his iron gloves, Járngreipr.

The belt has never been mentioned in the Marvel Cinematic Universe before, so this was an Easter egg reserved for the real Marvel comics readers in the audience.

Thor is played by Chris Hemsworth in the Marvel Comics Universe. He was last seen in Doctor Strange‘s mid-credits scene, which leads right into Thor: Ragnarok. That film, directed by Taika Waititi, opens on November 3, 2017. It will also feature Hulk/Bruce Banner (Mark Ruffalo), who we haven’t seen since Avengers: Age of Ultron.

Although the Thor movies aren’t usually considered among the best MCU movies, they did introduce one of the series’ best-loved villains, Loki. Thor’s evil brother is played by Tom Hiddleston, who was also in The Avengers. Hiddleston returns to the role in Ragnarok, while Cate Blanchett joins the cast as the villain Hela. 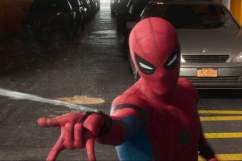