Season 3 Episode 3 of Rick and Morty has premiered, and once again we were not disappointed. Although fans knew Pickle Rick was going to be the focus of the show, they had no idea just how awesome and kickass he would be. But really, I may be a bit biased because it’s tough for Rick and Morty to ever disappoint me.

Here’s a quick review and recap of the latest episode, along with some viewers’ favorite moments.

This may have been one of the most violent, ridiculous episodes of Rick and Morty yet — and it was absolutely brilliant. Maybe it wasn’t one of the Top 3 episodes of all time for Rick and Morty, but it’s definitely not an episode to skip. (And no, I can’t think of a single episode that should be skipped.)

This episode told two stories: Rick in pickle form and how he’s still bad-ass even as a pickle, and Beth taking Summer and Morty to therapy.  This wasn’t therapy that Beth wanted. It was mandated by the school principal because of some trouble her kids had gotten into. So she wasn’t thrilled about going herself, but she did want her dad there. Of course, Rick doesn’t like to do the things he’s supposed to do (or that might be boring.)

This episode is one of the first Rick and Morty episodes that was written by a female writer. The last two seasons were written by only men, and the show’s producers decided to bring women into the fold this season. Pickle Rick was written by Jessica Gao.

Tonight! The single proudest script of my life @RickandMorty Ep.303 finally airs! I can't wait for you guys to meet #PickleRick pic.twitter.com/37ryn6Aa7e

And fans loved it (including me.)

First, Rick, Beth, and Summer discovered that Rick was a pickle. They weren’t impressed. This is nothing compared to some of the things Rick has done. Instead, they were annoyed, which was hilarious. Rick was using this experiment to get out of therapy. But instead of just getting out of therapy, he ran into bigger problems. Beth took the anti-pickle serum away from him and left him to fend for himself.

That’s when Rick was attacked by a cat, and then caught in a rainstorm, and ended up in the sewers fighting bugs and rats. He finally emerged in a top-secret Russian facility, where hilarity and action ensued.

Rick’s part was a great parody of all those action adventure movies, where the hero does crazy things and puts the most outlandish inventions together to save the day, seemingly out of nothing. Well, here Rick was able to create things pretty much out of nothing too. It had the same Evil Foreign Corporation trope, with the “person who went crazy because they were being caged up while a family member is held hostage” trope.

There were some great moments you could have missed during all those adventures, like when Pickle Rick took time to recycle:

#RickandMorty #picklerick is a psychopath, takes likes without remorse, but he #Recycles pic.twitter.com/kRreXmHpit

Fans also loved how this episode broke some of those molds by having Rick and Jaguar team up in the end. But of course, there had to be a huge explosion in the end too, because that always happens in action movies.

Let’s not forget: although Rick and Jaguar are now allies, that doesn’t mean Rick trusts him. He didn’t let him know that he had alternate versions of his daughter he could meet. He didn’t want to be bothered going there.

And then there was the therapy session, which was fascinating all by itself. First, there was the counselor who switched between being a “poop eating counselor” and being a regular therapist. (And just a note: that’s why she flipped the sign. When she’s counseling someone who eats poop, she has up the sign that shows that eating hotdogs is “courage.” Because I guess if you eat poop, it’s courageous to switch to hotdogs?)

The therapist really delved into the heart of the family’s problems. But the adults didn’t want to deal with those issues. This wasn’t the typical “therapist is terrible” trope. Nope. This was a therapist who really figured out what was going on, but she was hitting a little too close to home.

Here’s what she said to Rick.

Rick, the only connection between your unquestionable intelligence and the sickness destroying your family is that everyone in your family, you included, use intelligence to justify sickness. You seem to alternate between viewing your own mind as an unstoppable force and as an inescapable curse. And I think it’s because the only truly unapproachable concept for you is that it’s your mind within your control. You chose to come here, you chose to talk, to belittle my vocation, just as you chose to become a pickle. You are the master of your universe, and yet you are dripping with rat blood and feces, your enormous mind literally vegetating by your own hand. I have no doubt that you would be bored senseless by therapy, the same way I’m bored when I brush my teeth and wipe my ass. Because the thing about repairing, maintaining and cleaning is it’s not an adventure. There’s no way to do it so wrong you might die. It’s just work. And the bottom line is, some people are okay going to work, and some people… well, some people would rather die. Each of us gets to choose.

Some are wondering why the therapist was so chill about Pickle Rick. But remember… This Earth had to deal with giant heads forcing them into a music contest. And they were just recently controlled by the Galactic Federation. So yeah, a talking pickle isn’t a big deal anymore.

This was one of the more violent Rick and Morty episodes. Rick killed a lot of things, even severing a rat’s head and creating IronMan-esque armor from its body parts. (Not to mention the original suit, powered by a bug’s brain and a bug’s legs.)

In the end, Rick used genius and violence to win the day. And Beth and Rick bonded over their mutual dislike for the therapist, much to Morty and Summer’s disdain. They actually liked the therapist.

I mean. Where do they come up with this stuff?! #picklerick #RickandMorty pic.twitter.com/OYODRULby4

Beth gave Rick the serum, and they decided to go out just the two of them, either to Smoky’s Tavern or maybe Shoney’s. Beth has always wanted to bond with her dad, ever since he disappeared so many years ago. Now she’s finally getting the chance. Sadly, Cronenberg Beth, this Rick’s biological daughter (if you believe he was really originally from that universe), will never get that chance. He just abandoned her, as he mentioned earlier in this episode. He talked about abandoning one of his infinite daughters. (Some fans misunderstood and thought he said “infant” daughter.)

This episode also helped highlight that Beth’s not that much better of a parent than Jerry. The kids wanted to keep going to therapy, but she couldn’t even notice or pay attention to that. She really needs Rick’s attention and approval, to the point where she sometimes forgets about being a good mom. But at the same time, we saw last week that she really does care about her kids and wants to spend time with them. (But then again, she didn’t notice they were bots for three weeks, so there’s that.)

The after credits scene was great too. They took a scene that we had seen in the trailer and thought was going to be part of a full episode, and used it for the ending. That was fun.

This episode was a little different because this was one of the few times that Rick was on an adventure by himself. I’d prefer to see him adventuring with Morty or Summer (or even Beth or Jerry.) But the occasional solo adventure is fine.

The only sad part about the episode was that we didn’t get to see Jerry. He adds an extra depth to the show, and his absence was definitely felt.

What did you think about the episode? Let us know in the comments below.

But remember the show’s advice. “Stop digging for hidden layers and just be impressed.” 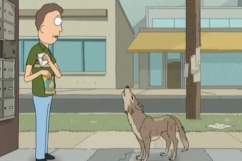