Make It Or Break It actress Cassandra Scerbo stars in this weekend’s Lifetime movie, The Perfect Stranger. The film, which first aired in early June, will re-air on Saturday, August 5 at 8:00 p.m. ET. Read on for a preview of the thriller and to meet the cast.

The Perfect Soulmate tells the story of Lee Maxson (Scerbo), who is obsessed with blogger and poet Sarah Miles (Alex Paxton-Beeseley). Sarah is also a young mom who has put her career on hold to raise her daughter. However, her husband is abusive and she wants to escape the marriage. She meets Lee, a young fan. But Lee is dangerous too, since she has an unhealthy obsession with Sarah. Nothing is really “perfect” in The Perfect Stranger.

“This is so different and unique. And even the whole aesthetic of the character, the way she dresses and does her hair, it’s different than any other role I’ve ever played,” Scerbo told Entertainment Tonight of her character in The Perfect Stranger. “So it was really fun for me to step out of the box.”

Scerbo told ET that she did extensive research to understand people with dangerous obsessions and read the script 19 times. “I needed to feel out of my element. [I needed to] give myself this weird feeling physically to be able to embody this character mentally,” she said.

Let’s meet the main cast of The Perfect Soulmate.

Cassandra Scerbo plays the dangerous Lee Maxson in The Perfect Soulate. The actress is best known for her role as Lauren Tanner in ABC Family’s 2009-2012 series Make It Or Break It. She has also starred in several TV movies, including three of the five Sharknado movies, in which she’s played Nova Clarke. She also voiced Heidi Weinerman on the 2012-2015 series Randy Cunningham: 9th Grade Ninja. You can follow Scerbo on Instagram and Twitter.

This Guy: On Vacation ?

Alex Paxton-Beesley is a Canadian actress who plays Sarah Miles, a poet searching for some peace in her life, only to find terror from her husband and a fan. She appeared in the TV series Murdoch Mysteries, Copper, The Strain, Pure, Private Eyes and Haven. She also starred in the pilot for the short-lived Minority Report TV series. You can find Paxton-Beesley on Instagram and Twitter.

Jeff Teravainen stars as Daniel Miles, Sarah’s abusive husband and the owner of a construction company. Teravanien’s credits include the TV shows Dark Matter, 12 Monkeys, Designated Survivor and Air Emergency. You can follow the actor on Twitter and Instagram.

Child actress Habree Larratt stars as Sarah’s daughter, Megan. She has already appeared in a handful of TV shows and movies, including Bellevue and Game On. She had an uncredited role in Billy Bob Thornton’s Bad Santa 2.

PLOT: “On the outside, Sarah Miles appears to have it all: her husband is charming and successful and their daughter Megan is bright and engaging. Having put her once successful career as a published poet on hold to raise Megan, Sarah now shares her writing on her poetry blog. But there’s a terrible truth lurking behind the doors of her suburban mansion… despite his polished persona, Sarah’s husband is controlling, manipulative, and abusive. Isolated and desperate to escape her marriage, Sarah welcomes the newfound attention of one of her devoted fans, a bookish young woman named Lee Maxson. But as Sarah gets closer to Lee, she begins to discover that she’s found an ever more dangerous companion.” 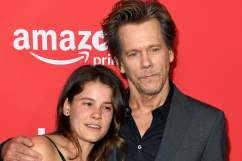