Nicki Minaj is preparing to release her fourth studio album Queen on August 17th. The album has been in the works for a couple of years now, and is said to be “her greatest work to date.” Despite it being only ten days away, however, Minaj has yet to release the album’s tracklist, causing fans to speculate as to which songs (and artists) will make the final cut.

The closest fans have gotten to an official tracklist has been a leaked screenshot of what appears to be the pre-order link on iTunes. The album’s lead singles, “Rich Sex” featuring Lil Wayne and “Bed” featuring Ariana Grande are visible, as they are on the iTunes window, but the screenshot fills in the rest of the nineteen tracks with alleged song titles and guest features. Check it out below.

8. Hump In Ya Back featuring Lil Jon

There are several aspects to the tracklist that make it possibly legitimate. For one, all three singles are listed in the proper slot, and all three have been officially confirmed to appear on the album.

Many of the artists listed as guest features, including Jay-Z, Ariana Grande and Beyoncé are people that Minaj has worked with in the past, and a potential reunion with Drake has picked up steam recently after the two appeared on Instagram.

Minaj has also spoken at length about her admiration for Lauryn Hill, so a collaboration between the two would not be out of the question. After a 2016 charity concert in which they both performed, Minaj posted a series of Instagram posts detailing her first time meeting Hill. “I’m in love with you—your spirit, your mind, everything about you,” she tells the legendary singer in a video.

The caption for the post read: “Excuse me while I have an outer body experience. Shaking, crying, a MESS!!!! this lady is the reason. Omg. The QUEEN. Goddess! The epitome! The bar! The *faints*. Ms Lauryn Hill told me to keep “spittin dat fire”. Is this real life!???”

There are, unfortunately, several reasons why the tracklist is liable to be a fake. For one, the screenshot came from an instantiated source, and neither Minaj nor her camp have taken steps to remove it– a reasonable reaction if it were in fact genuine. Another problem is the amount of songs provided on the tracklist.

The official iTunes pre-order lists nineteen songs, with three of them being the aforementioned singles. The tracklist pictured above only lists seventeen tracks, making it very unlikely that the leaked screenshot is the real deal.

Either way, fans have been taking to Twitter to voice their excitement for Queen and their eagerness to get their hands on an official tracklist.

“@NICKIMINAJ you are stressing the s**t out of me!,” wrote one user. “I need #queen now! Please stop ! And give us the official release date and tracklist. Please!!! I can’t sleep I can’t think, you don’t understand how much I love you.”

@NICKIMINAJ DROP THE FKING TRACKLIST OR THE DOCUMENTARY WE’RE SOO TIRED??? and pls don’t push back Queen. Thank you pic.twitter.com/JsWakpHZzx

I think you don't understand how hard it is for us barbz to know there is coming an album soon WITHOUT HAVING A TRACKLIST ?? THE FACT IS ARI DROPPED HER TRACKLIST WEEKS AGO AND YOU JUST PLAYIN WIT US LIKE SHIT ?
spill the tea sis. I can't. #Queen #Tracklist

Onika (@NICKIMINAJ ), Dont make me harass your employers. I need a date sus, and the tracklist….. @LilTunechi…. your employee play too much! @reginae_carter1 can you get your father to handle his employee! ??????????‍♀️#Queen #NickiMinaj #tracklist #Please pic.twitter.com/i8Fdl43yjt

@NICKIMINAJ Queen, you better share that tracklist or tell us if there's a mixtape coming out too challenge… pic.twitter.com/jurzUOgUWI

Just to think @NICKIMINAJ Album is about to come out & how far we came from harassment in the queen mention’s and dm’s . I’m so proud of y’all barbs … now sis you giving up that tracklist welling or …. pic.twitter.com/lBmFSKMaIg 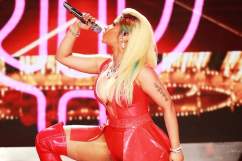