Eminem’s scathing takedown of Machine Gun Kelly, titled “Killshot,” has set Twitter on fire since the moment it dropped. Fans generally feel that the legendary rapper has ended Kelly’s career, and now, other rappers are starting to voice how impressed they are with the track as well.

50 Cent, Eminem’s former protegé and collaborator on tracks like “Patiently Waiting” and “Crack a Bottle,” hopped on Instagram to give Machine Gun Kelly some advice. “Don’t act like you didn’t know this would happen,” he wrote. “Oh my what have you got your self into. Get the strap.”

Don’t act like you didn’t know this would happen ?oh my what have you got yourself into. ?get the strap #lecheminduroi

This isn’t the first time that 50 has spoken up to defend Eminem’s good name. Earlier this week, he mocked Joe Budden for saying he’s been a better rapper than Eminem for the past decade. He reposted the link to Budden’s podcast and wrote: “Get the f*ck outta here joe butt head, we ain’t trying to hear that bullsh*t you kicking fool.”

Game and Tony Yayo, formers member of 50’s collective G-Unit, also got in on the fun. He reposted the “Killshot” link on his Instagram profile with the caption: “@eminem WTF did I just hear ?!?!?!?!?” He also included the hashtags “#ThisIsWhyiRap,” “#GOATsh*t” and “#Aftermath.” Yayo reposted his nothing but flame emojis.

Not everyone has been as impressed by Eminem’s diss, however. Jay Eletronica, the reclusive emcee signed to Roc Nation, took issue with some of Em’s lyrics regarding the death of Tupac and the supposed involvement of MGK’s boss, Diddy. The line in question goes:

Killshot, I will not fail, I’m with the Doc still
But this idiot’s boss pops pills and tells him he’s got skills
But, Kells, the day you put out a hit’s the day Diddy admits
That he put the hit out that got Pac killed

Electronica wasn’t having any of it.”@eminem, how dare you accuse diddy of killing tupac while you completely look pass jimmy iovine and those who profited from his death the MOST,” he tweeted. “You best tread carefully Son, before i come tear your ivory tower down like Sulaiman done the Templar Knights. #ripProof.”

Iggy Azalea was similarly displeased with Em’s references on the track, particularly the line where he raps: “You ain’t never made a list next to no Biggie, no Jay/ Next to Taylor Swift and that Iggy ho, you about to really blow.”

Azalea, who’s had beef with Eminem in the past, aired out her grievances on Twitter. “Diss songs shouldn’t be filled with celebrity name drops to pad out lazy bars,” she wrote. “Let’s talk about why it’s lazy now; but wasn’t in the earlier work. The earlier stuff was crazy, twisted and creative. This stuff feels more like picking names that fit easily into a rhyme scheme.”

For more about Azalea and Eminem’s rekindled feud, click below. 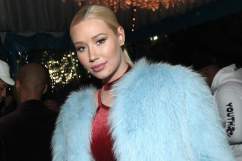