Season 5 of Bachelor in Paradise comes to a close and emotions are high. Several of the couples broke up just before the overnight dates, while others opted to live out their fantasies in their respective suites together. But, before we get into all the spoilers on what goes down, THIS IS YOUR MAJOR SPOILER WARNING. Do NOT continue reading if you don’t want to know what happens.

The three remaining couples who went into the overnight dates were Jordan Kimball and Jenna Cooper; Kamil Nicalek and Annaliese Puccini; and Chris Randone with Krystal Nielson. According to Reality Steve, two out of these three couples get engaged. Kamil and Annaliese is the couple that does not get engaged and, it looks like in previews of the reunion, the two have a very heated encounter.

The official ABC synopsis of tonight’s finale reads, “For one couple, the woman has been ready to get engaged from the moment they met, while her love-at-first-sight hasn’t been moving quite as fast. However, he seems eager to catch up so only time will tell if his feelings will get there in time to give her a storybook ending. For another couple, the journey hasn’t been easy with others attempting to come between them. Despite temptation, they haven’t given up yet, but have they developed the confidence in each other they need to take on the world together? The final couple is surely in love but has a lot of doubts, stemming from troubled family situations growing up. True love and commitment are daunting for both of them, given neither have experienced it before, but it may be even scarier for them to leave Paradise without each other.”

And, the reunion episode synopsis states, “Later, all questions will be answered when the cast reunites to catch everyone up on life since Paradise, including former couples that face one another for the first time after their devastating breakups. While some favorites reunite, others fight, as two old rivals go head-to-head once again. Looking for a second chance, one regretful woman is reunited with the man she broke up with, but can he forgive her once again? Then, the audience is shell-shocked when one romantic hopeful is blindsided and dumped onstage in one of the most intense breakups in Bachelor franchise history. As always, when it comes to Paradise, both passions and tensions are bound to run high.”

Going into the finale, Annaliese thought that Kamil could be getting down on one knee. She also tells him that she loves him. Kamil returns with his love for her as well, telling her that he is not ready for an engagement. Kamil does say that he wants their love to continue to blossom outside of the show and without an engagement just yet, but then he dumps her on the reunion.

As for Jordan and Jenna, the two were very nervous going into their final rose ceremony, but Jordan proposed and Cooper said “yes”. Krystal and Chris appeared very nervous and emotional as well, for their big moment. Krystal jumped up and down, exclaiming “yes” after Chris nearly faked her out. Shortly after he popped the question, Chris called his mother on Facetime to let her know the news.

On the reunion portion of the show, it was revealed that Jordan and enemy David had patched things up. Some of the cast-offs were still a little bitter about their break ups, especially Astrid Loch. She and ex Kevin Wendt were put in the hot seat tonight. Loch said that the trust between them is broken, but she can’t move on until she makes more sense of what happened. As for Wendt, he said he still wanted to pursue something with Loch. Wendt ended up professing his love to Loch and she returns his love. It looks like these two are back together.

Kendall Long admitted that she had regrets about her relationship with Joe Amabile on the show. Long then revealed that she went to visit Amabile in Chicago … and the cameras were rolling. Long then admitted to Amabile that she is in love with him, but he said he’s not sure if he would be able to get into the same kind of feelings again with her. Reuniting on the reunion show, Amabile admitted that he had started to shut Long out of his life before she came to visit in the Chicago. The two have started dating and are carrying out a long-distance relationship.

Then, Kamil dropped a bomb on Annaliese and ended the relationship in, what seemed to be, a very shady way. Annaliese had the support of her fellow BIP cast members. 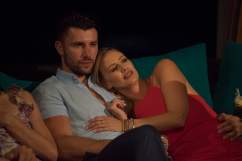