The new season of The Bachelor has people wondering what’s going on between Colton Underwood’s ex-girlfriend Becca Kufrin and her fiancé Garrett Yrigoyen. The couple have stayed quiet since announcing their engagement, and some fans have speculated that they may no longer be together. That being said, these reports are untrue.

Yrigoyen posted photos of Kufrin on Instagram as recent as January 1. Yrigoyen also took time to pay respects to his father, who passed away last year. “2018 was wild but hoping 2019 is even wilder,” he wrote in the caption. “A great man once told me ‘If it’s meant to be, it’s up to me. Don’t wait around for someone else to do it for you, get off your ass and do it for yourself.’ That great man is my dad.”

2018 was wild but hoping 2019 is even wilder. . . A great man once told me “if it’s meant to be, it’s up to me. Don’t wait around for someone else to do it for you, get off your ass and do it for yourself.” That great man is my dad. That piece of advice was the most solid that got me through many difficult and unique challenges this past year, but one that I’ll carry with me into 2019 and beyond. . . . Last night I rang in 2019 with a solid group of friends and the gorgeous @bkoof. Now its time to FIRE IT UP.

Yrigoyen also posted a photo of them drinking together on December 19. “We drank until our teeth were purple and we were speaking in cursive,” he jokingly wrote in the caption. The couple got engaged during the season 14 finale of The Bachelorette in August, but they admitted to Us Weekly that they don’t have any concrete wedding plans yet. “No dates, no months, no venue,” Kufrin explained, before Yrigoyen contributed his hopes for the big day: “I would say the fall of whatever year we choose because she loves the fall.”

The only thing they have discussed is their catering preference for the wedding. “The only thing that we’ve talked about that we want are food trucks,” Kufrin joked. “I want a great taco truck and a ton of Skee-Ball machines so everyone can just play games.” She also said that she would consider a televised wedding, but that it may be a bit much to remain in the public eye.

We drank until our teeth were purple and we were speaking in cursive. . . Thank you @visitsantabarbara @sbwinetours & @lotuslandgarden for showing @bkoof and me a great time.

“We’ll see, I don’t know,” she explained. “It’s weird because people saw our entire love story unfold and I think that’s something that they feel they would want to take part in, so who knows? I think we’ll cross that bridge when it comes. I’d be happy if we decided to and I’d be happy about it being really private too.” She added that her mother has urged her to lay low. “We don’t know,” she said. “I think right now my mom would kill me if I did anything more on TV. She’s like, ‘Just take a break from it all.’”

This is not the first time that Kufrin has been engaged. She was briefly set to marry former Bachelor Arie Luyendyk Jr., who proposed to her during the season 22 finale. They broke the engagement off when when Luyendyk decided he wanted to be with runner-up Lauren Burnham instead. 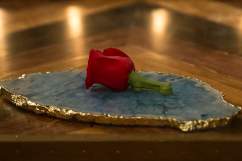 Who Gets the First Impression Rose on ‘The Bachelor’ 2019?

Read More
The Bachelor
Find out whether the couple are still together ahead of the season premiere.