Tyler, The Creator’s fifth studio album IGOR is set to be released at 9 p.m. PST on Thursday, May 16, or midnight EST on Friday, May 17, depending on your time zone. If that is too late for you to stay awake, you can stream and listen to it at your convenience.

Generally, albums become available around midnight EST on streaming platforms like Apple Music and Spotify. This has been the case for Tyler’s previous releases, 2015’s Cherry Bomb and 2017’s Flower Boy. On occasion, these platforms will throw a curveball at listeners.

Tyler, The Creator’s ‘IGOR’ Will Drop At Midnight EST on Friday

In a 2018 interview, Tyler talked the sound of the new album, and how it builds upon Flower Boy. “[Flower Boy is] more accessible, easier listening. I got great hooks, the beats are great, sh*t doesn’t need taking out. It’s cohesive,” he told Fantastic Man. “The album art is f**king flawless. I get all my points across. The features are done well. I found my version of writing a pop song but still a rap song. I still get weird musically, but it’s not too gross.”

IGOR, IGOR ( golfwang.com for this shirt)

When asked if he’s ever been in love, Tyler teased that the answer might be on Igor. “I don’t want to talk about that,” he said. “Um, that’s the next record.” The rapper has also released new merchandise to tie with IGOR, including an election-themed merch bundle featuring a ‘VOTE IGOR’ lawn sign, T-shirt, vinyl sticker, and 1.5 in button, in addition to a download of the album. The bundle costs $40 and is available to purchase via Golf Wang’s website here.

Lewis Rossignol, the artist who designed the album cover, talked about working alongside Tyler. “Tyler specifically gave me pictures of him to work from. He sent me a picture of him wearing this blond wig, sunglasses, a suit, and gold teeth,” he told Billboard. “He had a vision of what he wanted. I went back-and-forth on what he would want in it. I write things in my pieces. It didn’t have IGOR written on it until the last minute, when he told me that was going to be the name of the album.”

Despite having access to the rapper himself, Rossignol isn’t sure what to expect from the album. “I don’t know what the meaning of IGOR is, but if you look into the jacket he’s wearing in the piece, the top left actually has some of his handwriting that he sent me and I worked it in,” he revealed. “That five percent is actually Tyler. He’s really creative.” 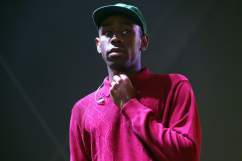