Kelly Clarkson is an American Idol winner, a world-renowned entertainer, a coach on The Voice, and now she’s a talk show host. But, she’s also a wife to husband Brandon Blackstock and a mother to their kids. So, even though Clarkson has a jam-packed schedule, she recently revealed that she puts her family first, above all else … even her career.

In an interview with People, Clarkson said that “I love being busy. The schedule is intense but I actually work really well under pressure.” At the same time, Clarkson puts her foot down when it comes to her children – daughter River Rose, 5; son Remington Alexander, 3; stepdaughter Savannah, 18; and stepson Seth, 12, as they are her top priority. Clarkson explained how she made sure to have quality time for her family when creating her new talk show. She said, “When we were doing the schedule for the show, I was like, ‘I have to drop my kids off at school.’ And I’m always the one who puts them to bed. You just have to prioritize and juggle and make people know it’s an important thing. And don’t feel guilty about it.”

Clarkson said that, as a blended family, she works hard at having a healthy home environment. She confessed to having tough days where she sits in the bathroom and cries but jokes that she is just a normal mother who is doing her best.

She and her husband share in responsibilities and recently, the two made the decision to move their family from Nashville, Tennessee to Los Angeles, California.

How Did Kelly Clarkson Meet Her Husband

Did y'all get the memo? #stripes

In addition to being Clarkson’s husband, Brandon Blackstock is also her manager, according to Good Housekeeping. And, he’s not just a random guy who manages his wife. He’s an industry bigwig, who rubs elbows with some of Clarkson’s celebrity friends and co-workers. In fact, he’s the stepson of country icon Reba McEntire.

Clarkson met her husband in 2006 when she was rehearsing for the American Country Music Awards. At the time, her manager was Narvel Blackstock, Brandon’s father and Brandon ended up being present for Clarkson’s rehearsal. At the time that the two met, Brandon Blackstock was married to now-ex-wife Melissa Ashworth.

According to Oprah Mag, Clarkson talked to Ryan Seacrest on KISS-FM in October 2012 about her meeting Blackstock. She said, “We were just in a room together, and then he came up and said he was from the same hometown as me and I was like, Oh, we’re so getting married. I was so that girl. When he became single, I was on the prowl.”

Cosmopolitan reported that the couple went on their first date on February 11, 2012.

The couple started dating in February 2012 and became engaged on December 14, 2012. Oprah Mag reported that Blackstock proposed with a yellow canary diamond ring and Clarkson announced the engagement news via Twitter. Clarkson wrote on Twitter, “I’M ENGAGED!!!!! I wanted y’all to know!! Happiest night of my life last night! I am so lucky and am with the greatest man ever.”

On October 20, 2013, Clarkson and Blackstock’s wedding took place at Blackberry Farms in Tennessee. 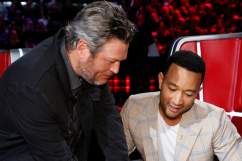