Jersey Shore’s Vinny Guadagnino was unmasked on Fox’s  The Masked Dancer, but fans may have not seen the last of his dancing skills.

The Jersey Shore: Family Vacation star has revealed that he would consider joining another big-name celebrity dancing competition because he likes the “challenge.”

After he was revealed as Hammerhead on The Masked Dancer, Vinny told Hollywood Life he has given thought to competing on Dancing With the Stars should he ever be asked.

“Yeah,” he told the outlet. “Seriously, I love this type of show and the challenge of it. So I’m definitely open to that… I had such a good time with this show. I’m also down to just keep dancing in general or whatever type of performance I could always do to entertain people.”

Dancing With the Stars is all about sequins, spray tans, and sambas, but The Masked Dancer comes with an extra challenge. While he loved his experience, Vinny didn’t necessarily love the 40-pound Hammerhead costume he had to wear. He explained that it was a “struggle” to perform each week while wearing the massive muscle suit.

“It’s torture,” he said. “I’m not going to lie. It is the hardest thing I’ve ever had to do, honestly. It’s hard enough for me to learn how to dance, but I have a 40-pound muscle suit on, I’m wearing this mask, you can’t see, you can’t really breathe, you can’t feel anything, you’re wearing gloves. So there’s another layer of challenge that people don’t really realize when they’re watching the show. They think you’re wearing a cute little costume. That thing is a challenge in itself. It was a struggle every week, but I tried to figure it out.”

Vinny described the experience as “the hardest, most difficult thing” that he has ever done and that even the rehearsals were “intense” because his identity had to be kept top secret from everyone except his dance teacher/partner.

He also had to make sure that he didn’t slip up and give away any of his signature mannerisms.

When one Instagram fan asked him,“HOW DID YOU NOT FIST PUMP,” Vinny replied, “It’s a mystery show, they don’t know it’s me underneath the mask so you can’t give it away.” 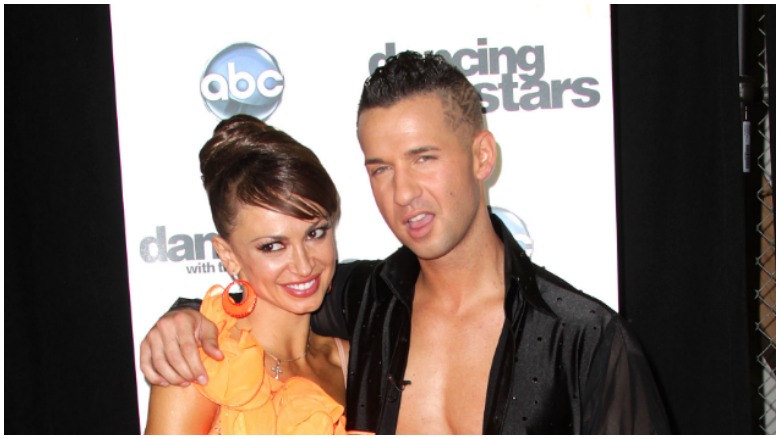 GettyDancers Karina Smirnoff (L) and Mike Sorrentino attend the premiere of “Dancing With The Stars” at CBS Television City on September 20, 2010 in Los Angeles.

Vinny would be in good company if he went on to compete on Dancing With the Stars.  Two of his Jersey Shore roommates have already competed for the mirrorball trophy on ABC’s celebrity ballroom competition.

In 2019, Mike “The Situation” Sorrentino competed on Dancing With the Stars with pro dancer Karina Smirnoff.  he was booted from the comp in Week 4, but unfortunately, the lingering effects of the comp led to his prescription drug addiction.

The Situation injured his neck during the ballroom dance competition and began taking pain meds which he became addicted to, according to TMZ. He checked into rehab in 2012.

The following year, Mike’s Jersey Shore costar Nicole “Snooki” Polizzi competed on the 17th season of DWTS. The Snooki Shop founder was partnered with pro dancer Sasha Farber and was blindsided by her elimination after dancing high-scoring samba in Week 7.

“I definitely didn’t think I was going to go home yet and I’m not ready to go home,” the tearful MTV star told reporters at the time, according to Today. “This experience has been amazing…. It just sucks. I don’t want to go.”

The 'Jersey Shore' star dished about a future stint on 'Dancing With the Stars.'