Update – No Man’s Sky is officially entering orbit on the PS4 and PC on August 9, 2016. To make matters even better, the game will hit retail as a physical release.

Gamers have been asking the very same question ever since No Man’s Sky was officially unveiled – “when is this thing finally coming out?”

During PlayStation’s Paris Games Week press conference live stream, we finally got an answer. No Man’s Sky is slated to release sometime within June 2016. The wait for this open universe exploration experience just got a whole lot longer. But thankfully, Hello Games treated us all to a brand new gameplay trailer.

In the video posted above, an older gentleman can be heard narrating over several scenes showcasing spacious planets. Plenty of action from the cockpit seat of a spaceship pop up, as well as a battle sequence between the player and a peculiar robot. This PS4/PC release looks more and more enchanting as it nears its development completion. From everything we’ve seen and heard so far, there’s a near limitless amount of content to discover in this game.

Us and plenty of other curious gamers still want to get more details on what else No Man’s Sky entails. Hopefully we get some additional trailers and info on the game before its June 2016 launch. 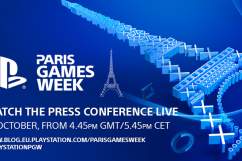