HQ Trivia had a special $18,000 New Year’s Eve jackpot, celebrating 2018 and the game’s introduction to Android. A total of 303 people won the jackpot, meaning that each person walked away with about $59.40. That’s hugely different from the $12,000 Christmas Eve jackpot that was only won by two people! The smaller winnings today certainly won’t be stopping people from playing HQ Trivia in the future, because you never know when you’ll know answers that no one else knows and you’ll get to walk away with a nice-sized win. Here are the questions and answers for the New Year’s Eve game. It was originally delayed because of a host of technical problems, but the game finally happened (although quite a few people complained that they were kicked out of one of the questions.)

The first question was fairly simple, asking which gadget this year appeared between everyone’s fingers. Many of the questions were about events that happened in 2017.

The second question was about a massive meme from a Turkish chef. I personally don’t even remember this meme, but I managed to get it right. (By the way, do you agree with the commenters that Scott looked drunk tonight? Who could blame him after the way the first game glitched so badly!)

And yes, even if the $2 bill isn’t still printing, it is still in circulation. It was produced until 1966, but then it was reissued in 2010 as a Federal Reserve Note with a reverse design. There’s lack of demand for these bills, so they’re rarely seen in circulation.

Yes, I got this next question wrong. :( The most followed celebrity on Instagram currently isn’t Beyonce, like I guessed, but Selena Gomez, former girlfriend of Justin Bieber. I should have gotten this one right, in retrospect, because the answer was obvious.

Simone Biles is the athlete who took a one-year sabbatical in 2017. Did you get this one right?

The EPA is the youngest government agency. If you’re interested in learning more about the CIA, check out Netflix’s new documentary called Wormwood. It’s quite intriguing.

I got this next question wrong. (Thanks to an extra life, I had another chance.)

Apparently the most Instagrammed location in 2017 in the entire world was Disneyland.

This one was fairly easy if you followed fashion this year. Puffer coats and chunky sneakers were very popular, but I hear chunky sneakers are going out of style for 2018. As you can see from the comments, people were suffering a lot of glitches at this point. Some couldn’t even put in a guess. (If you’re wondering what epaulets are, they’re an ornamental shoulder piece on an item of clothing.)

And the glitches still continued for this next question, which looked at the top fiction work of 2017 on Goodreads. Little Fires Everywhere is by Celeste Ng and was named Best Book of the Year by multiple groups, including People, Washington Post, Bustle, Esquire, Southern Living, The Daily Beast, GQ, and more. Part of the synopsis reads: “When old family friends of the Richardsons attempt to adopt a Chinese-American baby, a custody battle erupts that dramatically divides the town–and puts Mia and Elena on opposing sides.  Suspicious of Mia and her motives, Elena is determined to uncover the secrets in Mia’s past. But her obsession will come at unexpected and devastating costs.”

This next question, quite frankly, was terrifying. Why on Earth are people most likely to allow AI to take over their body? Haven’t they seen Black Mirror on Netflix? Don’t they watch apocalyptic movies? I was shocked by this one, to be honest.

And my app glitched for the last question and I missed getting a screenshot of the question, only ending up with Scott’s photo. :( The question was about what technology was used to discover the mysterious void in the Great Pyramid of Giza. Two of the options were “subatomic muons” and “planar harmonics.” The answer was subatomic muons. You should read up on them because they are fascinating particles.

And 303 people won tonight’s game. If you played for the first time, what did you think?

I‌f you’ve never played HQ before, there’s no better time than the present. The game is available on iOS and Android. To play, simply visit https://get.hqtrivia.com, this will take you directly to downloading the game on iOS because it’s not currently available on Android yet. If you liked this story, use the author’s referral code (type in: writingwithcats) as a way of saying thank you! 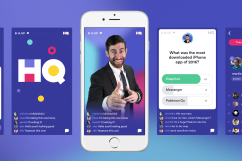