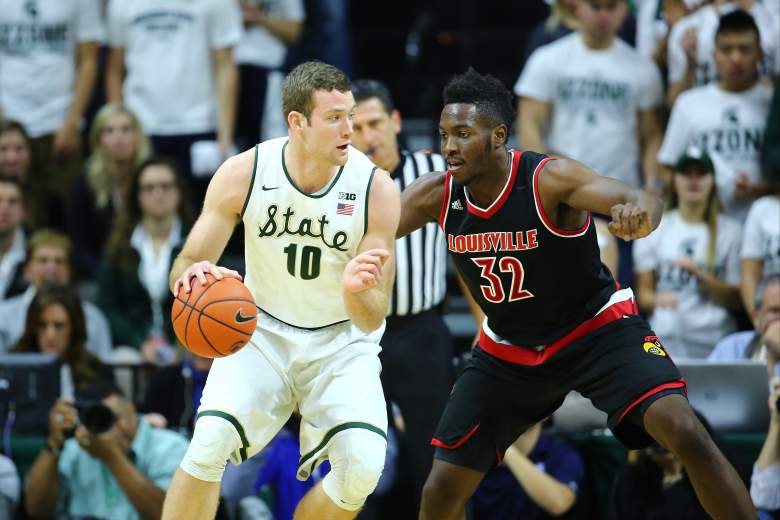 Michigan State battled to a victory over Louisville last week and it’s got the Spartans on the rise in the rankings. (Getty)

We’ve got upsets, court-storms and top-10 matchups. It’s all enough to make anyone’s hoops-loving head spin. Luckily for fans, we’ve got rankings to help us sort through all the madness and we here at Heavy have broken down the top 30 squads in the country.

After a road loss to UCLA where does perennial No. 1 Kentucky land? And what about Maryland, who was a preseason favorite, but couldn’t quite hold on against a fully healthy North Carolina squad? We’ve got it all covered.

Read on for squads ranked 30 through 26 and then keep clicking through to see how the rest of the rankings played out.

The Colonials have notched some pretty impressive early-season victories so far this year. After defeating Virginia in November and holding their own against Cincinnati, George Washington bounced back from its first loss of the season with a 72-64 showing against Seton Hall. Keep an eye out for Tyler Cavanaugh. The junior, fresh off an All-Tournament performance in last weekend’s Barclay’s Center Class, racked up 16 points and seven rebounds and is finding his rhythm after sitting out last year due to NCAA transfer rules.

Next Game: Tuesday, vs. Penn State

The Game Cocks stayed perfect on the season and matched its best start in 12 years after a dominant 81-63 victory over South Florida last week. Michael Carrera led the offensive charge with a season-best 19 points and, for good measure, chipped in seven rebounds as well.

Next Game: Tuesday, December 15 vs. Drexel

UNLV doesn’t open conference play until the end of the month, but by then this squad may already have a bit of a reputation. The Runnin Rebels notched their second victory over a ranked squad this season with last week’s 80-69 victory over Oregon, sparked by an absurdly productive performance on the offensive side of the ball. UNLV shot 44.8 percent from the floor and if this team can keep taking the “smart” shots, it’ll be tough to slow down.

Next Game: Wednesday vs. Wichita State

It’s been a little while since the Huskies took the hardwood, but last week’s 82-49 victory over Sacred Heart is enough to inspire a good amount of confidence. It’s an interesting start to the season for UConn though. The Huskies are 4-0 at home, but 1-2 on neutral courts.

Next Game: Wednesday vs. Maryland at Madison Square Garden

It felt like a Big East battle even when it wasn’t. It also wasn’t the result the Orange were hoping for. In the first of Syracuse’s games without Jim Boeheim on the sidelines this season, the Orange dropped a 79-72 game to Georgetown. The loss stings, but there’s good news. Syracuse rallied from a 21-point hole and showed some flashes that could inspire some confidence in the next few weeks.

Next Game: Wednesday vs. Colgate