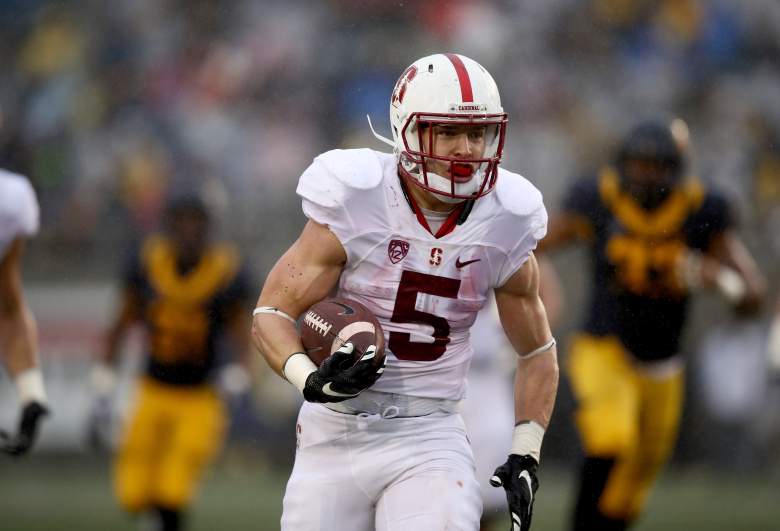 Following in his father’s footsteps, Christian McCaffrey will hear his name called during the 2017 NFL Draft.

The former Stanford University running back did it all for the Cardinal in his three seasons at the school. He rushed for 3,922 yards in his collegiate career to go along with 21 touchdowns on the ground. He was a dual threat, too. He amassed 1,206 receiving yards paired with 10 touchdowns through the three years.

McCaffrey’s incredible career at Stanford shouldn’t come as too big of a surprise, though. He comes from a highly successful athletic family and his three brothers are also football stars. 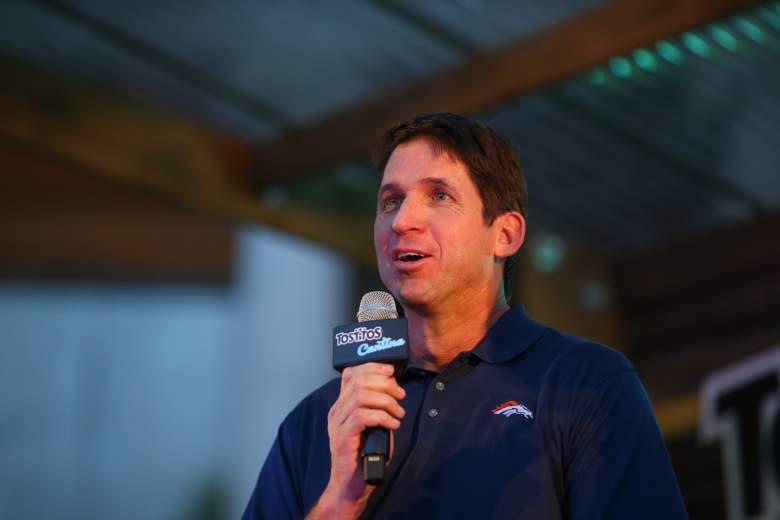 You don’t have to look to far to see where some of Christian’s football talent came from.

His father, Ed McCaffrey, played wide receiver at Stanford and went on to have a successful 13-year career in the NFL. He was drafted by the New York Giants in the third round of the 1991 NFL Draft and won three Super Bowl championships (Super Bowl XXIX with the San Francisco 49ers, XXXII and XXXIII with the Denver Broncos).

Ed was a Pro Bowler in 1998 after he became one of the more reliable targets for Hall of Fame quarterback John Elway. He set a Broncos record in 2000 for the most receptions (101) in a single season.

In Super Bowl XXXIII, he had five catches for 72 yards. During his career, Ed caught 565 passes for 7,422 yards and 55 touchdowns.

After his playing football, Ed became involved in youth football camps, founding SportsEddy in 2011 and later other camps, including a cheerleading camp for people with Down syndrome. 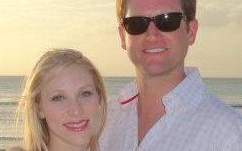 2. His Uncle Played Basketball At Duke

He played at Duke under coach Mike Krzyzewski and won a national championship with the Blue Devils in 1991. He was the team’s second-leading scorer and put up 16 in the championship win against Kansas.

Billy opted to transfer from the school after and sat out the next season before playing at Vanderbilt University. He excelled there in his last two seasons of eligibility. He was a two-time All-American and averaged 20.6 points at the school along with having a .464 3-point percentage.

After college, Billy had a five-year professional career playing overseas in Italy, Germany and Australia. Once he hung up the sneakers, he started coaching.

Christian’s other uncle Scott Sime — on his mom’s side — played football and wrestled at Duke from 1982-1986. 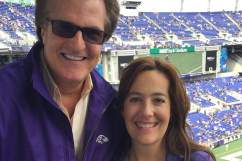 3. His Mother Played Soccer at Stanford

Christian’s father Ed met his wife — Lisa Sime — while they both attended Stanford. They had four sons together who all play football.

Lisa told The Denver Post that the two met while she was getting worked on by a trainer.

I think we met in preseason in the trainer’s room. I was in there getting taped. If he doesn’t remember, it’s because he was this big-time football player, and I was just this little soccer player.

While football was never on Lisa’s agenda, she was a star soccer player at Stanford. She played for the Cardinal from 1987-1990. Her father was a highly-successful athlete during the 1950s.

4. His Grandfather Was an Olympic Medal Winning Sprinter 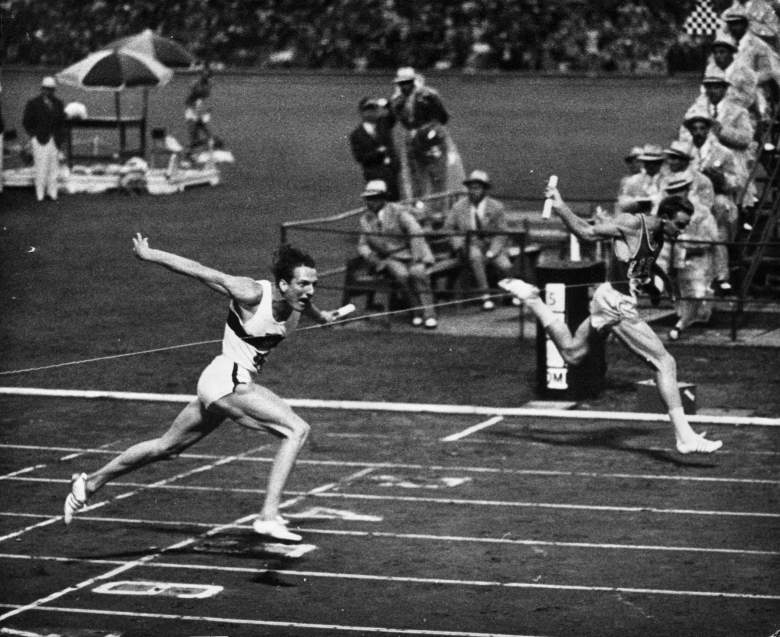 Dave Sime of America beating Martin Lauer of Germany in the final of the men’s 4 x 100 metres relay, but the Americans were disqualified. (Getty)

Lisa’s father Dave Sime — Christian’s grandfather — was one of the fastest men in the world during his prime.

Sime was a star basketball, baseball and football player from New Jersey, but didn’t pursue sprinting until he went to Duke University. He played on the baseball team there and was an All-American.

Once he found his way to the track, he realized his calling.

At one point, he was the best man in the world at what he did. He broke or tied five outdoor world records and four indoors in sprints and low hurdle events.

Sime came within inches of winning a gold medal at the 1960 Summer Olympic Games in Rome in the 100-meter dash.

He rallied down the straightaway with German sprinter Armin Hary, but Hary’s chest crossed the line right before Sime’s did. He returned home with a silver medal.

After his athletic career, he worked as an ophthalmologist in Miami for over 40 years, working on patients like President Richard Nixon and baseball players Ted Williams and Mickey Mantle. 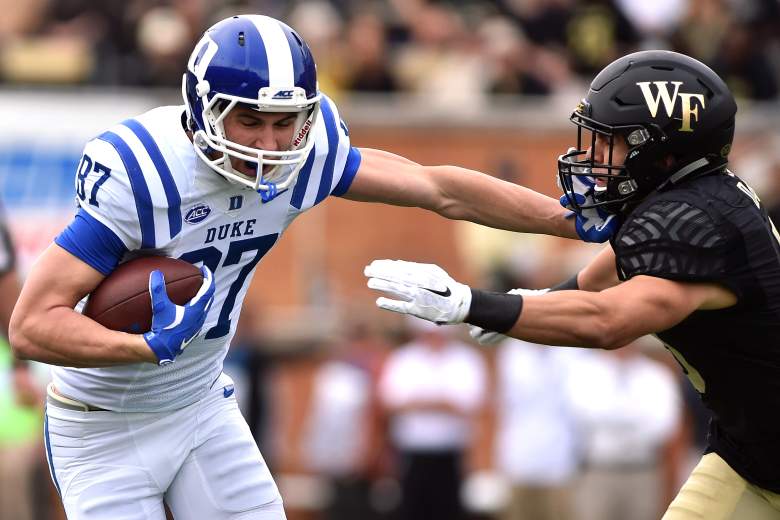 Christian is one of four McCaffrey boys in the family.

The oldest, Max, was signed to the Green Bay Packers late during the 2016-2017 season. That comes after quite a successful collegiate career at Duke.

He was an Academic All-ACC member two times and caught 117 passes for 1,341 yards and 12 touchdowns in his 53 game appearances at Duke.

Before signing with the Packers, he was with the Oakland Raiders as an undrafted free agent, but didn’t make it past training camp cuts.

Christian was the second born of the brothers, with Dylan about to play for the Michigan Wolverines as part of their 2017 class of recruits.

At Valor Christian High School in Colorado, Dylan led the football team to two-straight state championships at quarterback. He’s a four-star recruit and finished his senior year at Valor going 204-for-306 passing for 2,796 yards, 31 touchdowns and five interceptions. He also had 107 carries for 579 yards and 10 touchdowns.

In addition to that, he played on the basketball team and closed out his athletic career at Valor with a state championship.

Congrats Dylan on a hard fought (mid-game stitches) win in the Colorado 4A bball championship. The split eyebrow was merely a flesh wound. pic.twitter.com/5fxhVWYcJz

The youngest of the McCaffreys is Luke, a class of 2019 recruit that’s already been offered a scholarship by Michigan. He hasn’t had much playing time in high school, though.

Luke, a quarterback, has had to sit behind his older brother Dylan for his first two years. He also plays basketball, lacrosse and runs track at the school. 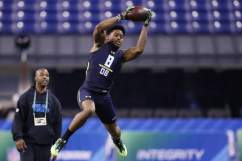