Riley Cooper is back in the game after he was temporarily dismissed after making offensive racist comments during a Kenny Chesney concert.

Riley Cooper will be back at practice with the Eagles today and will play in their preseason game against the Patriots this weekend.

Deadspin notes, Cooper returned to his place in the NFL Eagles yesterday after missing four days of team practice since being dismissed. Cooper was allegedly supposed to receive therapy following the incident, however, sources are unclear whether or not he actually did. Deadspin points out, Cooper was extremely reserved when it came to talking about what he did while he was “away” from the football scene… Could this be an indication that he isn’t being honest with the media? Or, does he just prefer to keep his private life, well, private?

Tell your friends the news about Cooper's return.

However, Cooper did somewhat open up to sources about how he spent his four-day break, saying:

I went out and seeked help. I talked to my family and seeked some help. But I’m going to keep that between me and the others that are helping me out. It went well.

Maybe we can rest assured that whoever Cooper did talk to, he’s sorry for his idiotic comments. But, are Cooper’s teammates — many of whom are black, as forgiving as we are? When asked how he dealt with his teammates, according to ESPN Cooper said:

I talked to everyone individually. I told them, ‘I don’t want you to forgive me, because that puts the burden on you. I want it all on me.’ I told them that and I told them I apologize. They could tell it was from the heart, they know I’m not that kind of person. It feels good to have support from the guys.

Now that Cooper is back, the Eagles have plans for him on the field that range in terms of formations and positions, as detailed by Bleacher Report.

Cooper would be little more than a decoy toward the top of the formation, keeping the defense from crowding the box. 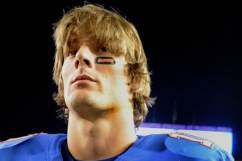