Iggy Azalea and T.I. teamed up at the 2014 BET Awards for a performance together with their song “No Mediocre.” Check out the official music video above, featuring a twerking Azalea while we wait for the BET Awards performance video.

After starting out with “No Mediocre,” Azalea took over with her hit song “Fancy” in a sexy black, fitted outfit. 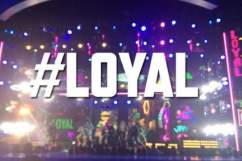 Chris Brown Performs With Travis Barker at the 2014 BET Awards