On an episode of The Bachelor this season, Arie Luyendyk opened up to talk about a past relationship that had great effect on his life, according to the Daily Mail. Luyendyk revealed that, “My most serious relationship was with someone who had two kids, and we lived together and we were together for a few years. She was actually pregnant with my child, and when she got pregnant, I thought to myself, ‘Well, maybe it’s meant to be.'” Luyendyk was traveling for his racing career and said that one day, his pregnant girlfriend, at the time, called him, telling him that she lost the baby and wouldn’t be there when he got home. Luyendyk said that was the end of the relationship.

During the hometown dates, Luyendyk’s reputation as a ladies’ man rubs some of the women’s relatives the wrong way and they are skeptical of his true intentions. So, what is his dating past really like?

How did you spend your Tuesday? Mahalo! #honupacificsurf

Get the rundown on each of his known girlfriends and reported hook-ups below … Some of these women had a lot to say about the Bachelor star and it’s not all sunshine and roses.

My actual ride or die

Sydney Stempfley recently told Entertainment Tonight that she was blindsided when to learn that Luyendyk was the new Bachelor. Sounds a bit similar to Giustina Lee’s story, who told In Touch Weekly, “Arie has a problem. I think he is confused [about what] true love is.” A source told ET Online that Stempfley and Luyendyk split just one month before his big Bachelor announcement. According to Stempfley, “The night before the breakup … Everything was normal! The next day, we had plans after I got off work. It was just a regular day, so it definitely caught me by surprise … It was very emotional … I couldn’t really get a definite answer … I could tell that he was emotional, but there wasn’t tears on his end.”

According to AOL, Stempfley said that she and Luyendyk met online and that they hit it off right away. Currently, Stempfley resides in Arizona.

Who's ready to paarrtyy ? Come join @ariejr and me tonight @bevvyaz to watch us on @millionairetv 6-9pm free entry but if you like you can purchase these cool t's and a signed copy of my book for a good cause @bbbsaz

Many know Robertson as the winner of Ben Flajnik’s season of The Bachelor, but she is also reportedly a former lover of Luyendyk’s. In fact, she wrote in “I Didn’t Come Here to Make Friends: Confessions of a Reality Show Villain” that she moved on from Flajnik with Luyendyk just one week after her split from Flajnik. Robertson wrote in her tell-all that, “He was dating this woman the entire time we were together!”, according to Radar Online.

Recently, Luyendyk revealed to E! News that he and Robertson are still quite connected. Luyendyk dished that he actually owns the property she lives on and is her lanlord. He also said that, “The romantic side of our relationship, that was way in the past, so we’re just really good friends. “It’s fun to talk to her about this whole experience because she’s been through it … so before I left we had a good conversation about it.”

Law student Lee told In Touch Weekly that Luyendyk visited her in Las Vegas, Nevada on August 17, 2018 and said the two dated off and on from August 2013 to August 2017. Lee also said that Luyendyk called her in December 2017, once filming for The Bachelor had wrapped. She maintained that she didn’t pick up the phone and decided to ignore his call. She also said that when Luyendyk ran into her parents later, “He was like, ‘I’m so sorry, I think she’s mad. I hope she’s OK.’ He also made a comment to my parents, saying, ‘I really wish she [had] showed up.’ I don’t know if he wanted me to show up [on The Bachelor to] add drama or because he wanted to marry me. I don’t know. We’ll never know.” Lee confirmed that she has watched the show and it appears to be fake.

Selma Alameri Daniels is a married woman, who was previously a contestant on Sean Lowe’s season of The Bachelor. Daniels and Luyendyk reportedly had a brief relationship, as Luyendyk told Us Weekly that, “Obviously we shared a common interest, when two people go through this [the show], it’s easy to relate to them … That’s what kind of drew me to her in the first place. She’s obviously a beautiful girl but we decided it was probably best for us not to date … I just want to keep my relationships private in the future.” Clearly, being on The Bachelor is definitely not private.

According to Bustle, Jones is an Arizona-based sports reporter and she previously was in a serious relationship with Luyendyk. In 2015, Luyendyk talked about his relationship with Jones to Pop Sugar, revealing how they first met. Luyendyk stated that, “We actually met at the racetrack, just because that’s basically where I live. She was in PR for another driver. We met and kept in touch. She actually works in sports radio and lives in Phoenix. So, yeah, we just hit it off, and now we live together, so there’s that!” Luyendyk also said that when the two dated, they traveled a lot and watched a ton of Netflix.

Luyendyk was the runner-up on Emily Maynard Johnson’s season of The Bachelorette and she went on to get engaged to Jeff Holm, but the two did not last. According to People, Johnson married automotive management consultant Tyler Johnson in 2014 and she now has three children. After marrying her husband, Johnson admitted to People that, “For so long I felt so embarrassed and ashamed about that TV stuff. The grace that my faith has given me to wipe that all away and not find worth in that and find it through God, Tyler has been a great example of that for me. He has truly lived out God’s grace every day.”

When Johnson dumped Luyendyk, he said he was heartbroken and just before his Bachelor gig started, he told People that, “It was really hard for me to get over that relationship. But I learned a lot about myself and how deeply I could love somebody. It made me want to do it again.” 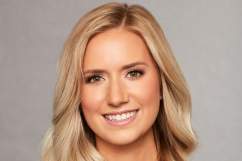 Read More
Reality TV, The Bachelor, TV
Who has Arie Luyendyk dated? Get the rundown on all his known exes and rumored hook-ups.