Kanye West has fans clamoring for new music. His latest album Jesus Is King was set for release on Friday, October 25, but it was delayed by several hours. West took to social media to announce that he is working on the final mix of the album.

Thank you for being loyal & patient

We not going to sleep until this album is out!

To my fans, thank you for being loyal & patient,” he tweeted. “We are specifically fixing mixes on ‘Everything We Need’, ‘Follow God’ & ‘Water.’ We not going to sleep until this album is out!” The album is now available on streaming services.

‘Jesus Is King’ Was Scheduled for Midnight EST on Friday, October 25

Generally, albums become available around midnight EST on platforms like Apple Music and Spotify. This has been the case for other high profile releases like Drake’s Scorpion or Taylor Swift’s Lover. On occasion, these platforms will throw a curveball at listeners, and few artists have thrown more curveballs that Kanye West.

Take West’s 2018 album Ye for example. It was originally scheduled for release at midnight on June 1, but it wasn’t made available until the following afternoon. A similar timeline played out with NASIR, which was a collaborative effort between West and Nas. While the album was set to be released on streaming services at midnight, it was delayed by several hours, and released in the middle of the night.

It’s possible that West will continue to tweak the album once it’s released. 2013’s Yeezus and 2016’s The Life of Pablo were both leaked ahead of their proper release, but the rapper continued to make tweaks to the mix. The versions that are available on streaming services are noticeably different that the versions that were originally put out. We have every reason to believe that Jesus Is King will be more of the same.

Jesus Is King was expected to be released on September 27 at midnight, but West’s wife Kim Kardashian took to Instagram to announce a new date that night. “He’s dropping the album Sunday,” she wrote. “Just a few final tweaks to the mixes.” The latest release date is in conjunction with the IMAX documentary of the same name.

For one weekend only in theatres. Limited tickets still available. #JesusIsKing jesusisking.imax.com/tickets

The documentary will follow West as he travels the country and performs gospel music for fans. “We’re here to spread the Gospel. I’m not here for your entertainment,” he says during a voiceover. “I’m an evangelist. So my music, my films, every conversation, every room I go in, we’re here to save souls, save you from eternal damnation.”

IMAX released a statement that ties the film closer to the album. “Filmed in the summer of 2019, Jesus Is King brings Kanye West’s famed Sunday Service to life in the Roden Crater, visionary artist James Turrell’s never-before-seen installation in Arizona’s Painted Desert,” the statement reads. “This one-of-a-kind experience features songs arranged by West in the gospel tradition along with music from his new album Jesus Is King — all presented in the immersive sound and stunning clarity of IMAX.” 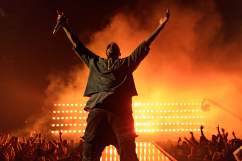 How to Stream Kanye West’s ‘Jesus Is King’ Album 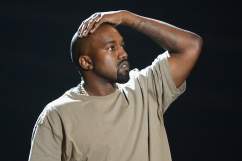 Read More
Hip-Hop, Kanye West
Kanye West is set to release his long-awaited album 'Jesus Is King.' Find out what time the album will be put out.