The suspect duped into a fake plot to blow up New York’s Federal Reserve Bank pleaded guilty in court and will face life in prison.

Quazi Mohammad Rezwanul Ahsan Nafis confessed and made a plea deal with federal prosecutors on Thursday, according to a press release.

The Bangladeshi native was sent to bomb the prestigious bank using a 1,000-pound car bomb, which turned out to be fake.

“I had intensions to commit a violent jihadist act,” the 21-year-old said at a Brooklyn federal court. “I deeply and sincerely regret my involvement in this case.”

He was charged back in October with using a dangerous weapon and attempting to provide materials to the terrorist group al-Qaida. Nafis believed he had the blessings from the group to carry out this act, but he has no ties with them. Investigators have said that he came to the U.S. to fulfill his duty as a jihadist and wanted to target America’s economy. He was also recruiting individuals to form a base of operations here in New York.

What Nafis didn’t count on was that one of the individuals was an informant to the FBI who exposed his acts during an FBI sting in October. The informant notified the FBI and teamed up with the NYPD and the Joint Terrorism Task force to stop him. NYPD Commissioner Raymond Kelly said:

Nafis is just one of the more recent examples of individuals charged in terrorist plots against targets in New York City. There have been 16 plots against the city that we know of since the World Trade Center Twin Towers were destroyed in 2001. Time and again, individuals intent on making a violent terrorist statement select New York City as their venue. That’s why, as in many other cases, the NYPD cooperated closely with federal prosecutors and the Joint Terrorism Task Force of the FBI to bring Nafis to justice.

In his statement, Nafis also mentioned other targets of interest, including the New York Stock Exchange and President Barack Obama.

Nafis drove a van that was loaded with dummy explosives and parked in front of the bank. He tried to detonate the bomb remotely from a hotel room using a cell phone, but it turned out to be a hoax. 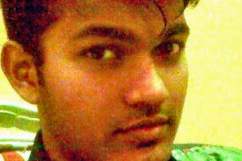 Loading more stories
wpDiscuz
0
0
Would love your thoughts, please comment.x
()
x
| Reply
Quazi Mohammad Rezwanul Ahsan Nafis, who thought he was blowing up a real bomb but was really duped by the feds, faces life in prison.