Videos showing police violently arresting University of Alabama students at an apartment in Tuscaloosa, apparently over a noise complaint, have gone viral on the college’s campus, with many asking whether the use of force was necessary.

Details about what led up to the incident are vague, but according to Pete Pajor, a graduate of the school who was among those posting the videos on social media, police responded to the apartment because of a noise complaint.The students have been identified by police as Brandon Williford, 21, of Tennessee; Matthew Macia, 22, of Georgia; and Caroline Giddis, 22, of Tennessee. Williford, a senior, is the house manager for the Sigma Chi fraternity. Macia is also a member of the fraternity.

Another video was posted Sunday show the officers pulling two students out of an apartment. It was recorded from outside the building. One of the students is hit with a Taser and then thrown to the ground, where he is beaten by the officers as they try to arrest him. Two other students, a male and a female, is then thrown to the ground next to him. Watch that video here:

Multiple videos have also emerged since the first was posted online. The second video (watch it below) shows the same scene from inside the apartment:

This is a second video taken from inside of the apartment. pic.twitter.com/ClsmSmIZeK

The third video shows the same part of the incident as above, as well as the moments after:

Another video was taken by a student who lives in a neighboring apartment:

Tuscaloosa Police said they have launched an internal affairs investigation.

“The City of Tuscaloosa and the Tuscaloosa Police Department have been made aware of videos regarding an incident that occurred on November 8, 2015 at 3:19 am that were a result of a loud music call,” the department said in a statement posted on its Facebook page Sunday night. “A full investigation of the circumstances that are depicted in these videos will be conducted and all appropriate measures taken to ensure the integrity of the Tuscaloosa Police Department in serving the citizens of Tuscaloosa.”

The unnamed officers have been placed on paid leave. The first officer on the scene is an eight-year veteran of the department, the officer who used his Taser is a 12-year veteran and the third officer has been with the department for two years, Chief Steve Anderson said Monday. He said other officers could also be put on leave as the investigation continues.

Anderson called the incident a “black eye” for the community, according to Al.com.

“Needless to say, once I started watching watching it, I was deeply disturbed by what I saw,” Anderson told reporters. “We’re going to take a look at each and every officer’s actions. We’re going to do an open and honest investigation and be transparent. We take this very seriously. I take it very personally.” 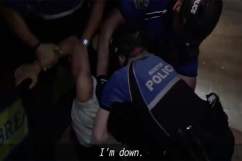 Students and others have taken to social media to react to the video.

I'm pretty upset about the Tuscaloosa Police brutality video. I do not feel safe in my town because of the police.

I will always support and respect the Police but the brutality video out of Tuscaloosa is enough to make me sick to my stomach.

I usually support all actions by police officers, but that video from Tuscaloosa is absolutely ridiculous.

The Tuscaloosa police department seemed overly abusive to someone who was surrendering. I have no respect to those policemen. What a world..

Having experienced brutality like this from Tuscaloosa Pd first hand, I hope they clear house and start from stratch

Another student posted the video and said, “Tuscaloosa Police proving once again they view UA students as nothing but a nuisance.”