A 21-year-old woman whose family says she received death threats from a female stalker was found shot dead in her car in a random driveway in Virginia.

Heather Ciccone was killed December 6, 2015, the Spotsylvania Sheriff’s Office said in a press release. She was found after a man called police to say there was a car parked in his driveway on Piney Branch Road. Responding officers found Ciccone inside the car, where she had died from a gunshot wound.

Ciccone’s family told WTVR-TV that her death was a “cold-blooded murder.”

Police announced the arrests of two men in the case 15 months after Ciccone was killed. Jonathan Julian Vejarano, 28, and Joshua Christopher Williams, 29, were arrested on first-degree murder charges on March 21, 2017.

Details about what led police to the two men and the motive in the case have not yet been released. Click here or the link below to read more and for updates:

1. Ciccone Told Her Mother She Was Going to Help a Friend Whose Car Had Broken Down

Mysterious murder: Heather Ciccone was killed in this driveway. But no ties to the home. Details 6p @fox5dc pic.twitter.com/c9oGicYReh

Ciccone’s mother, Stacy, told NBC Washington her daughter said she was going out to help a friend whose car had broken down. She left their home at about 9:30 p.m., and never returned. She was found dead at about 11 p.m., police said.

“Why would you take my little girl away from me?,” Stacy Ciccone asked during an interview with the news station.

Her father, Dennis, told the news station, “It’s hard to put in perspective until it really happens to you.”

There is no apparent connection between Ciccone and the driveway where she was found dead.

Police posted photos of Ciccone’s car and asked that anyone who saw it before the shooting to contact them:

Ciccone died of a single gunshot wound to the back of the head, according to court documents obtained by the Fredericksburg Free-Lance Star. The newspaper reports that police found “lots of blood” in the 2010 Kia where Ciccone was shot.

2. She Posted on Facebook About Issues She Was Having With Another Woman, but That Woman Was Not Charged

Ciccone had been posting on her Facebook page in the past week about issues she was having with another woman, but that woman was not charged in the case.

On December 4, in her last public post, she wrote, “I hate when a female gets her friend to request me to lurk on my s**t. Like I see the girl who don’t like me in your pictures with you. Tell her to man up and send her own request.”

She wrote on December 3, “I swear I give up … I’m DONE playing nice.” Earlier that day she wrote, “I finally see the BIG picture. It hurts but from here on out, it’ll only get easier for ME.”

On December 2, Ciccone wrote, “I swear this bitch has NO f*****g life.” On that post, her sister commented, “What did she do now? You need to take your tail down to the magistrates and file harassment and stalking charges!”

Courtney Ciccone posted on Facebook on Monday, pleading for help in finding her sister’s killer.

“Please help us find who did this selfish, unthinkable act of hate! She was the sweetest most caring person you’d meet. Someone murdered her in cold blood and left her to die alone! Words can’t even describe what they are putting our family through and what her family is going to miss out on,” she wrote.

Ciccone played high school basketball at Chancellor High School in Fredericksburg until 11th grade, when she stopped playing because of her job. The school posted a message on Twitter about Ciccone’s death:

Rod Crooks, the athletic director at the high school, told the Free-Lance Star, “It’s just pretty much caught everybody off guard, especially here in Spotsylvania County.”

J.P. Gibbons, one of her coaches, told the newspaper Ciccone had an “infectious smile,” and was a solid basketball player, scoring 21 points during one game her sophomore year. He said she was always pointed in a positive direction.

“She was driven both on and off the basketball court,” Gibbons told the newspaper. “I expected her to do some great things.”

Ciccone worked as a server at Red Robin in Fredericksburg.

Her sister, Courtney, told WTVR-TV that Heather was a great aunt to her niece and nephews.

“She had such a good, bubbly personality and smile,” Courtney told the news station. “She was the sweetest most caring person you’d meet.”

5. A GoFundMe Account Has Been Set Up to Help With Funeral Costs & Getting ‘Justice for Heather’

A friend of Ciccone’s family set up a GoFundMe account to help pay for funeral costs and to get “Justice for Heather.”

Cory Chewning wrote on the page, “As the community knows, We lost a dear soul this morning to a senseless act of cruelty. Heather was not only a beloved daughter, sister, aunt, and friend to everyone she came in contact with she was one of the more caring people in the world. She was taken from us too soon and her family was not expecting this at all. We want to help this family in their time of need not only to get #JUSTICEFORHEATHER but to help them with final expenses as well. Please consider donating and sharing this to help! Our comminuty is strong and always comes together in times of need.” 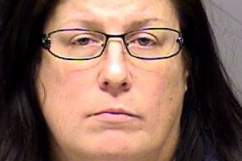 Read More
5 Fast Facts, Breaking News, Crime, Police, Virginia
A 21-year-old woman was found shot dead in a car in Spotsylvania, Virginia, and police are calling her death a homicide. Her family says she had a female stalker.