Letitia James is a born-and-raised native of Brooklyn who was elected to serve as Attorney General of New York on November 6, 2018, at age 60. She’s an American lawyer with a bachelor’s degree from the City University of New York, Lehman, a law degree from Howard University, and a master’s degree in public affairs from Columbia University.

James had taken a job as a public defender after law school, represented the 35th Council District in Brooklyn in the New York City Council, and served as Public Advocate for two terms before running for Attorney General of New York.  As the shiny, new, attorney general for New York, i.e. the state of New York’s top law enforcement official, she’s made many splashes in the news. She’s often described as a lawyer, politician, and activist. She’s also known as Letitia “Tish” A. James.

She was pronounced the winner of the Attorney General race about one hour after polls closed in November. Before she won the Attorney General seat on November 6, 2018, she had easily won the Democratic primary for Attorney General on September 13, 2018 with 40.6% of the vote, beating out Zephyr Teachout, Sean Patrick Maloney and Leecia Eve, who never quite caught up to her large lead.

Her win as Attorney General was made possible by approximately 3.45 million votes, or 59.65 percent of the votes in New York; it was a decisive  win. Her Republican contender, Keith Wofford, earned roughly 1.99 million votes, roughly 34 percent, according to Patch.com’s reporting of unofficial vote totals from the state Board of Elections.

Before James took office, a well-known attorney general, Eric T. Schneiderman had been serving as New York’s attorney general. Schneiderman had sued Trump University for a $25 million settlement over claims of defrauding its students. He had also fought against Trump’s notoriously called “Muslim ban,” an agenda to ban travel from certain Muslim countries. He’d also sued to protect DACA immigration programs, and was in general known to be a progressive champion. In fact, not only had Eric Schneiderman fought against political misconduct, he had, in what turned out to be one of the biggest ironies of his career, fought against Harvey Weinstein, suing Weinstein for heinous sexual abuses and powering the #MeToo movement full-steam ahead with the power of his office.

By May of 2018, Eric Schneiderman himself resigned in shame amidst allegations that he had a serious drinking problem and was a serious abuser of women. Jane Mayer and Ronan Farrow of The New Yorker released a full investigation and report of his abuses—and Schneiderman resignation came only a few hours after their story had gone live and viral. “While these allegations are unrelated to my professional conduct or the operations of the office, they will effectively prevent me from leading the office’s work at this critical time,” Schneiderman said in a resignation statement. “I therefore resign my office, effective at the close of business on May 8, 2018.”

An acting attorney general, Barbara Underwood was appointed shortly afterwards by the Democratic-led state legislature to take over Schneiderman’s office and finish out his term. Once the Schneiderman era concluded, James took over. Essentially, James ran a highly successful attorney general campaign in November of 2018, at a time when the #MeToo movement exposed and problematized male-dominated spaces of power.

3. She Openly Promised to Stop Donald Trump as an ‘Illegitimate President’ 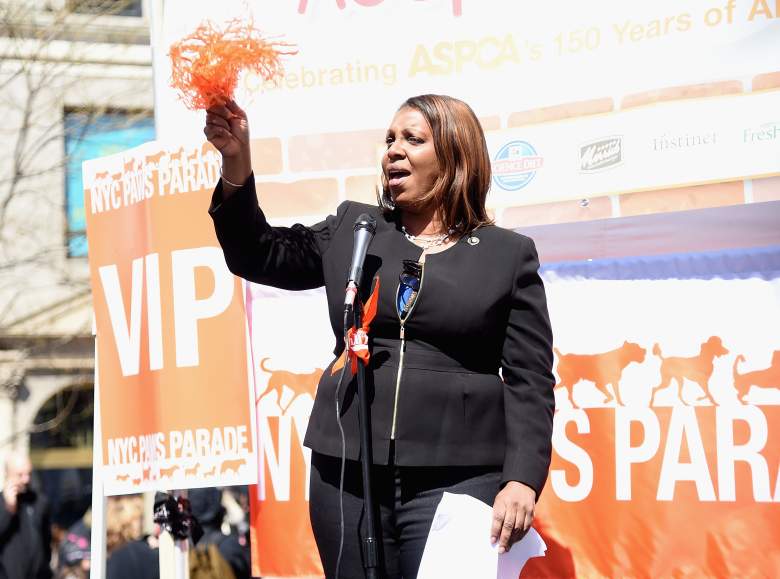 James did not mince words about her mission to investigate Trump and his real estate and business dealings. Her specific intentions, according to reports, are to pursue state charges for those who receive federal pardons under President Trump, making it clear that she wants to remain vigilant against any of Trump’s potential loopholes. She acknowledged the difficulty in pursuing state-level charges against Trump associates, because double jeopardy laws in New York State might pose a challenge for her ambitions, but she told NBC News that modifying those double jeopardy laws “is a priority.” She stated in her NBC News interview: “I have concerns with respect to the possibility that this administration might pardon some individuals who might face some criminal charges, but I do not want them to be immune from state charges.” She said she planned to have double jeopardy laws modified within the first 100 days of her term.

James takes issue with President Trump’s personal wealth sources as well. “President Trump was almost on the verge of bankruptcy and then all of a sudden he was flush with money and we all know that domestic banks were not offering him—extending any credit to him—and so the question is where did he get all of that money from,” she said in her campaign video, according to CNN. James has also taken interest in investigating whether Trump’s businesses in New York violate the Constitution’s ban on “emoluments,” a clause that prohibits presidents from receiving gifts, funds, or monies, from foreign governments.

James ran on a clear message that challenged Trump’s legitimacy, saying in an op-ed video for NowThis, “I’m running for attorney general, because I will never be afraid to challenge this illegitimate president when our fundamental rights are at stake,” according to CNN.

As a result of James’ passionate declarations against Trump’s agenda, Trump himself has taken notice.

….In any event, it goes on and on & the new AG, who is now being replaced by yet another AG (who openly campaigned on a GET TRUMP agenda), does little else but rant, rave & politic against me. Will never be treated fairly by these people – a total double standard of “justice.”

As reported by writer Alex Henderson for Salon.com and Alternet, the president might have been able to get away with pardons for those charged with federal crimes, like Scooter Libby and Joe Arpaio, but he lacks the power to grant presidential pardons for criminal convictions in individual states. As a result, James plans to keep her New York State attorneys busy with President Donald Trump’s affairs—making James one of Trump’s “worst legal nightmares,” according to Henderson, especially when you compare her with Robert Mueller, who is a special prosecutor at the federal level.

James doesn’t at all plan to stop at Donald Trump. She has mentioned that she plans on going after anybody with ties to Trump’s dealings, including family members. She said to NBC News that she plans to investigate the infamous June 9, 2016 Trump Tower meeting, which Donald Trump, Jr., Jared Kushner (Trump’s son-in-law), and the now convicted Paul Manafort are said to have attended. A Russian attorney named Natalia Veselnitskaya, as well as a few others, were also reportedly at this meeting, which has become a strong focal point for the investigation of possible collusion between the Trump administration and Russian operatives.

5. Because of Her Commitment Toward Trump Investigations, She Faces Questions About Partiality in Her Role as Attorney General

Naturally, calling Donald Trump an “embarrassment” and an “illegitimate president” drew attention to James’ campaign and subsequent win as the new attorney general.  For example, in a blog called Lawfare, Chuck Rosenberg, a former US attorney, senior FBI official and chief of the Drug Enforcement Administration, wrote that James’ comments about Trump could “demonstrate a prejudgment of the facts and a political predisposition to the issues she now must manage apolitically and dispassionately.” To be fair, Rosenberg also criticized Matt Whitaker, the Trump-appointed U.S. attorney general, for prejudging the Russia and Trump investigations before their conclusion and urged that both Whitaker and James recuse themselves.

Others say James’ focus is just fine. Eric Soufer, a former staffer who worked as the director of communications and senior counsel for policy under Schneiderman, for one, disagrees that James’ stances against Trump would harm any of her cases. “I don’t think it’s going to torpedo any of her cases, based on what she’s said already, but because these cases are in a politically charged environment they can make the day-to-day work of litigation more challenging,” Soufer said. “It was true for her predecessor too.”