New York Giants quarterback Daniel Jones showed great promise in his rookie NFL season. Despite starting just 12 games in 2019, the ex-Duke Blue Devil led all first-year signal-callers in passing touchdowns with 24, including a terrific final seven-game stretch in which he accounted for 18 touchdowns and just five interceptions.

Yet, what if the G-Men handed the keys to their offense over to the 2019 6th-overall pick from the jump? Quite frankly, the results may have been historic.

In a chart shared to the Dynasty Fantasy Football page on Reddit, rookie passing yards and touchdowns for all 1st-round quarterbacks since 2009 were collected and extrapolated over a 16-game slate. The numbers accumulated in the chart take the average of games played by a rookie QB and apply said numbers to the games not played. 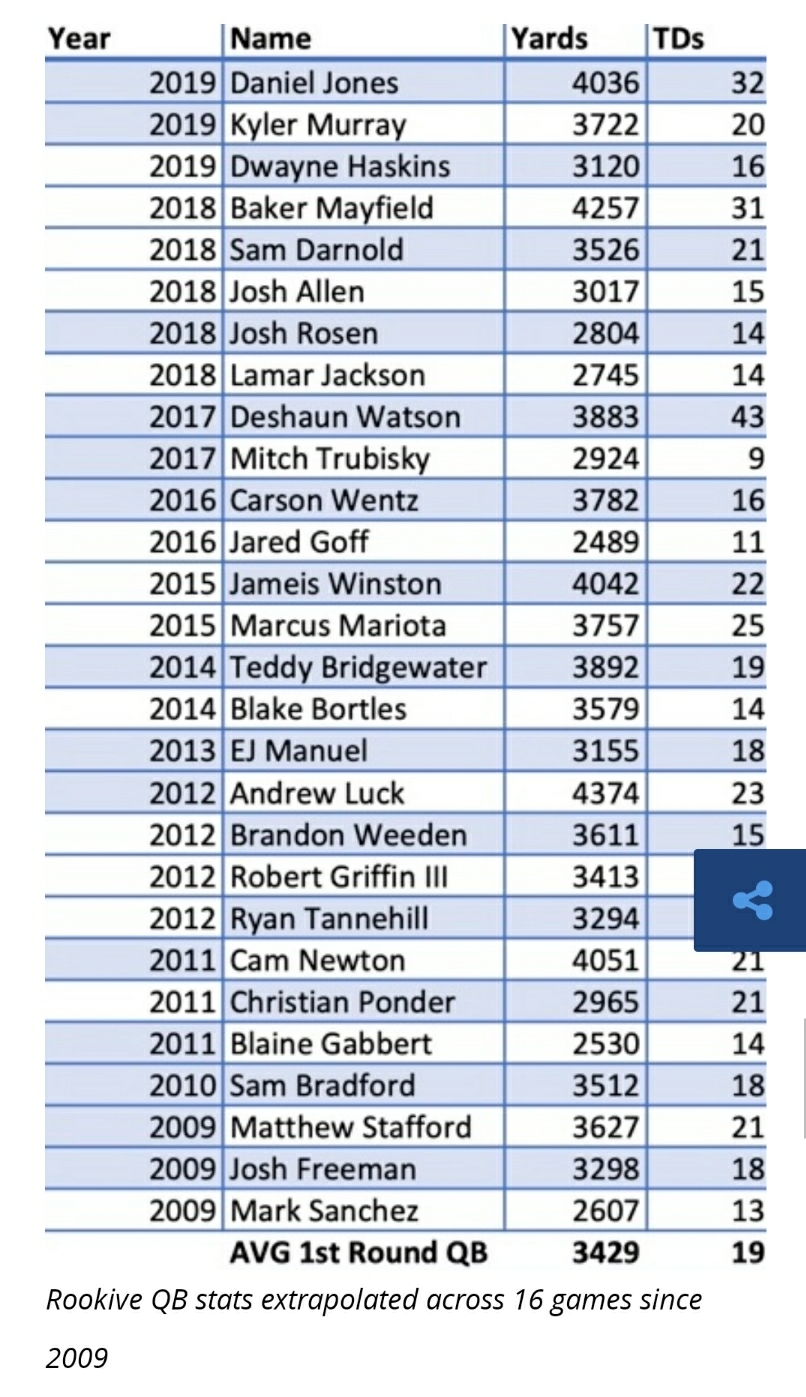 As you likely noted due to his name sitting atop the chart, Jones’ numbers are quite absurd. His 4,036 passing yards rank behind the likes of only Andrew Luck, Cam Newton and Jameis Winston.

In terms of touchdown passes, only DeShaun Watson’s abnormal 43-TDs outranks Jones’ 32-passing touchdowns. To put into consideration how impressive those numbers are, Cleveland Browns’ Baker Mayfield currently owns the NFL record for most touchdown passes in a single-season by a rookie with 27.

The average shown in the graph above takes into consideration all 28 1st-round quarterbacks to enter the league since 2009. If we were to extract Jones’ statistics from those numbers that would put the rest of the field’s average at 3,413.5 passing yards and 18.7 touchdown passes. Meaning Jones bettered the average 1st-round quarterback by more than 622 passing yards and more than 13 touchdowns.

Obviously, these numbers mentioned above are all speculative, evident by Jones’ mid-season statistical jump. However, what you can take away from the graph is that it’s evidently clear that Big Blue has a potential legitimate signal-caller on their roster for years to come.

If head coach Joe Judge’s recent comments to Art Stapleton of NorthJersey.com are any indication, he feels the same way.

I’m very pleased with how Daniel’s worked this spring. I’m pleased with the energy he brings, the attention he brings, he’s very competitive. He’s started to demonstrate a lot of leadership, and that’s starting to carry over, he has a lot of good intangibles. And, you know what, we’ve had a lot of good conversations. He’s not afraid to tell me what he thinks, he’s not trying to tell me what he thinks I think, which is what you need.

Jones will certainly need to cut down on his league-leading 18 fumbles from 2019 if he hopes to progress to the level Big Blue faithful envision. With that said, the Giants are hopeful that another year under his belt, an improved offensive line in front of him and an additional nine-pounds to his frame will help drastically decrease those numbers.