Getty Vikings left tackle Riley Reiff has made a decision whether to take a pay cut or be released.

Vikings left tackle Riley Reiff was given an ultimatum on Sunday to either take a pay cut or be released. Reiff said his goodbyes to teammates a day later as it appeared the Vikings would move on without their starting left tackle of four years.

But alas, Reiff has agreed to restructure his contract with the Vikings, Tom Pelissero reported.

Following the Vikings trade for ex-Jaguars defensive end Yannick Ngakoue, the team had virtually zero funds and several contracts to renegotiate, leading to the team asking him to restructure the final two years of his contract. He was set to earn a $10.9 million salary and had a $13.2 million hit to this year’s cap.

Reiff was given the day off from practice on Sunday and was seen at TCO Performance Center on Monday, although he did not practice. Mike Florio reported that Reiff told teammates he expected to be cut — likely what his agent told him as they assessed the market for his talents.

ESPN’s Courtney Cronin tweeted that the Vikings “had a strong piece of leverage here in negotiations. No team was willing to pay Reiff close to that $10.9 million (salary).”

“Vikings leverage is – what is your market? The pool of teams that would be willing to pay that price tag are small if not obsolete. Reiff is a top-15 paid left tackle right now. Difficult to think he’d get that money this late in the year elsewhere,” Cronin added.

Following the brief scare of who will fill Reiff’s role at left tackle, the Vikings starting offensive line — which has been touted as an area of continuity for the team that is replacing seven starters — returns four of its five starters from a season ago in Reiff, right tackle Brian O’Neill, center Garrett Bradbury and Pat Elflein — who is taking Josh Kline’s spot at right guard this season. Dakota Dozier is a near-lock at left guard as the line’s only new starter.

Reiff was working out in the weight room at practice on Tuesday. When he presumably returns to the field, he will be under a new contract that will reduce his pay outside of the top-15 left tackles in the league.

During Reiff’s three years with the team, Pro Football Focus has ranked him 38th (of 57), 23rd (of 62) and 26th (of 60) at his position. He has been the epitome of an average tackle in the league while he enters the 2020 season as the 14th highest-paid player at his position, per Sportrac.

For the past three years, he has been an average pass-blocker in protecting Kirk Cousins’ blindside while the rest of the Vikings offensive line continues to develop.

“When (Reiff) first came here, he changed the culture of the offensive line room…it really started with him when he first got here.” 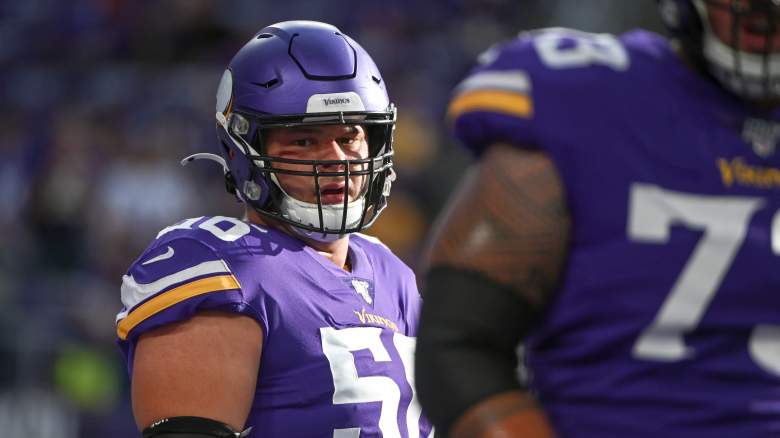 GettyGarrett Bradbury and Brian O’Neill were named to ESPN’s most underrated players list.

Reiff has been a veteran anchor for the defensive line that introduced 2019 first-rounder Garrett Bradbury and 2018 second-rounder Brian O’Neill — who both were named among the NFL’s most underrated players and have the potential to become stars at their respective positions.

Pat Elflein was drafted in the third round of the 2017 draft and is getting a fresh start at right guard, his preferred position he played in college.

All other starters other than Reiff are all on their rookie contracts still, and if they see some future success, could become mainstays for a Vikings franchise that hasn’t had a Pro Bowl offensive lineman since Matt Kalil in 2012.