Yesterday it came out that Teresa Giudice and husband Joe are charged with 39 counts in tax and money fraud. 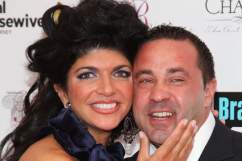 In turn, the couple could face up to 50 years in prison. However, several sources are saying that the sentence is lowered to a possible 30 years, rather than 50. The couple headed to court this morning in Newark, New Jersey, surrounded by media, walking hand-in-hand into the courthouse.

Joe Giudice has been released on $500,000 bond for now. The couple’s travel freedoms have also been limited according to Deadline.

Judge Cathy Waldor compelled the duo to hand over their passports and imposed travel restrictions on the Giudices. In what is an obvious sign of a flight risk concern, the couple is now only allowed to travel in New Jersey and New York State.

In addition, Joe will be subjected to drug tests, while wife Teresa will not.

The couple’s arraignment hearing is set for August 14th. According to NJ.com, Joe Giudice could face deportation if convicted.

At the court hearing, a federal prosecutor explained that Joe Giudice is not a citizen of the United Stares, but of Italy. If convicted, he would subject to immigration proceedings and would likely be deported.

In addition, after the hearing U.S. Attorney Paul J. Fishman said a plea deal hadn’t been discussed yet.

According to E! Online:

The Guidices were accompanied by Joe’s mom, who was seen cussing at camera crews that swarmed around them. And at one point, Teresa’s hubby even slapped a photographer’s camera, prompting a warning from his attorney not to do that.

The last thing the couple needs is further problems as this is not even the first time the couple has had legal troubles, as Joe Giudice was arrested for a DUI just last year. In addition, the Giudice’s had also filed bankruptcy, which also has a part in their current fraud case.

On an interesting note, the couple has hired separate attorneys for their fraud case. Teresa, the Fabulicious writer plans to plead “not guilty”, determined to pull her family through this and try to avoid jail time. 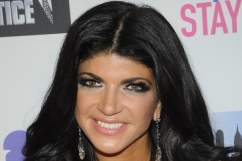 Teresa Giudice Speaks Out to Plead Not Guilty in Fraud Indictment

Tonight, sister-in-law and Housewives co-star Melissa Gorga will be hosting a white party at Shrine Lounge & Nightclub in Connecticut. We wonder if husband Joe will be able to muster up the energy to attend with his wife after all the stress he must be suffering from his sister’s current legal issues.

Wishing them all the best!