It’s Jenny McCarthy’s first day as a host on The View with Whoopi Goldberg, Sherri Shepherd, and Barbara Walters. Now all of us get excited and jittery on our first day of work, but how would you feel if your new boyfriend joined you? That’s right, sexy New Kid on the Block Donnie Wahlberg comes on as a guest.

Check out a cute video of host Jenny McCarthy and her “New Kid” slow dancing in the video below at a fundraiser for Bridges Academy. Just so you know, there’s a lot of butt-grabbing going on.

Also on The View today was a discussion and tutorial on twerking. Then, they cut to a video on the dangers of twerking. Check out the video below.

Another highlight was a small twerking session between Sherri Shepherd and Jenny McCarthy. Check it out below.

Anyway, back to the woman of the hour. On Jenny’s first day, there are a few cameos from Matthew Broderick and Donald Trump for a fun little video she and Sherri Shepherd put together where Shepherd is giving McCarthy a tour of New York. Unfortunately for Shepherd, McCarthy is already quite familiar.

So, let’s get back to Donnie. He tells viewers the story of how the two got together. First he says they met on the Andy Cohen show and then reveals that Jenny had slipped him her number after he appeared on her show and he didn’t call her for a while. But, the two have been officially together since the 4th of July. Have a look at the photo below that shows the amazing balloons and flowers Wahlberg flooded his girlfriend’s dressing room with on her first day of her new job on The View.

And, I have to say that Donnie Wahlberg announces that he and his brother are opening some more burger joints called “Wahlburgers.” Jenny McCarthy then comments, “His buns are quite delicious.” After this comment, Jenny and Donnie are made to play a version of the Newlywed game to see how much they know about each other. Let’s just say Donnie totally rocked it. Oh, and Jenny McCarthy is all about Donnie’s butt.

Oh, and let’s just say that things also heat up a bit as Sherri Shepherd reveals her steamy long-time crush on Donnie as she sports her “I Heart Donnie” shirt. Sherri gets flowers, a big hump, and somewhat of a lapdance-like goodbye from the New Kid. 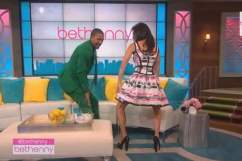