It seems that David Cassidy may have a secret love child … Take a look at the 5 Fast Facts on the woman in question, Shelly Wright.

1. Wright Claims Cassidy Conceived Her Over Thirty Years Ago

Apparently, North Carolina resident Shelly Wright thinks that the former star of The Partridge Family, David Cassidy, had a one night stand in Tennessee over thirty years ago and she was the result of that union.

According to Radar Online, Wright tried to reach out to Cassidy’s publicist, but was “given the run-around.” Wright says that she’s not interested in money.

I just want him to finally acknowledge me. I’m not getting any younger and I just want some closure. I want to meet my dad.

If this is a sincere and legitimate interest to determine your family history, that is one thing. If, on the other hand, as an adult you are trying to realize financial gain in any way or use David as a ploy to get publicity, I hope you will have the decency to stop now. If you truly think there is a chance you are related, you have integrity as he does and would not do anything to hurt anybody.

I’m sure Wright is hoping that Cassidy is a lot friendlier than the impression she’s been given of him. Her mother described him as cocky and arrogant, but that was over thirty years ago. As for his publicist, Wright may have stepped over some boundaries as she tried to trick Geffen. This is what happened:

At Wright’s insistence, Geffen finally agreed to have Cassidy submit to a DNA test, on the condition that Wright would pay for it. Geffen then mailed a hair purportedly from David’s head to Wright, who sent it to a lab for testing. But before the results were back, Wright got the feeling she was being tricked, and called Geffen, as a test, to tell her that the results were positive. David’s publicist flipped out on me and said, ‘Shelly, you’re a liar!’ She told me that the hair wasn’t even from David’s head. I knew I couldn’t trust her. I was like, d***n I knew it. I paid for that DNA test and I was back where I started again.

Apparently, Wright looks just like Cassidy’s daughter Katie. Shelly Wright was raised by her mother, Donna G. Wallace and famed Nashville songwriter James Bohon, but always felt that something was wrong because she looked nothing like Bohon. Apparently, the whole family used to talk about it, which made Wright very uneasy. When it came to Bohon, Wright said:

He always picked up my sister instead of me and had more of a relationship with her through the years. I was confused.

4. Donna G. Wallace Revealed a Shocking Story to Her Daughter

In 1973, Wallace and Bohon apparently separated for a short time. Because of Bohon’s industry background, Wallace was always around musicians and famous artists. Wright tells the story of her mother saying:

One night, she went out with one of her friends, and David Cassidy was there. He was on tour and had a show in Nashville. They both got drunk and slept together in the back room, a VIP room. It was just a one-night thing … She ended up pregnant and she went back to James Bohon because she already had a child with him.

Not only did Cassidy look just like her, Wright believes, but she also bears a striking resemblance to Cassidy’s other daughter, actress Katie.

In addition to reaching out to Cassidy’s reps, Wright also reached out to his son Beau via Twitter.

I was able to send him a private message, and I just explained the situation to him. I said, ‘Did you know David has a secret daughter? I’m your sister.’ I just begged, ‘Will you help me? Will you do a DNA test? If I pay for the DNA kit and send it to you.’ And he said, ‘Sure, absolutely. I’ll help you.

She hasn’t heard back since. 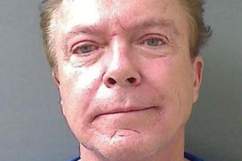 David Cassidy from the ‘Partridge Family’: Arrested for Drunk Driving