The Francis Underwood-Raymond Tusk political drama continues to unfold. Here’s what happened in season 2, episode 7 of House of Cards.

The episode begins with an attack commercial against President Walker and his cabinet, with a heavy emphasis on Frank. Soon the entire team is convened in the White House to discuss the attack ads and where they are coming from. It is revealed that the Super PAC funding the attack ads cannot be immediately traced. The team then goes to work on how to fight these attack ads with midterm elections coming up. Walker pulls Frank aside and says that he made a mistake in making him Vice President. Things get very heated. Frank then sends the Walker a punching bag as a joke to reconcile. Walker seems to enjoy the gag gift.

2. Is Raymond Tusk in Bed With China?

In a meeting with a secret advisor, Frank deduces that Raymond is funneling money to a Missouri-based casino owned by Native American Dan Lannigan to fund the untraceable attack ads against himself and the President. He sends Doug to Kansas City to investigate the casino. Once Doug is in Kansas City, he seduces a cocktail girl to get an inside scoop into the daily operations of the casino. He finds out that the casino has a connection to a Chinese businessman named Xander Fang, and ultimately the samarium crisis. Doug heads to Beijing to further investigate. Frank confronts Raymond and discovers that he has bought off Congress. Doug and Fang reach a tentative deal. Doug heads back to Washington.

Frank and Walker are seen being very chummy. They discuss dinner plans with their wives later that week. But Frank doesn’t tell Walker what he knows about Raymond. At the planned dinner, the first couple seems argumentative. The first lady later admits that Christina has caused some trouble between them.

Remy is deep into digging up Frank’s skeletons. Between his continuing relationship with Jackie and his hiring of Seth for a further look into Frank’s affairs, Remy wants dirt. Frank senses something off with Seth and asks him, “What exactly are you up to?” Seth comes clean and admits that he’d rather work for Frank than Remy. Frank then turns Seth against Remy.

Frank meets with Native American casino head Dan in Washington. Frank tries to make a deal with Dan and offers him a direct line to the White House. Dan turns Frank down, citing the fact that all he cares about is money and that he has no trust in the federal government considering their history with Native American relations. 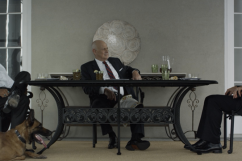