Although Kate Mara comes from a famous family, she is making a name for herself in Hollywood. Here’s all you need to know about the 30-year-old actress who is steadily building her resume with captivating roles in both film and television.

1. Rooney Mara Is Her Younger Sister

Rooney Mara, who played the titular role in The Girl With the Dragon Tattoo, is Kate’s sister.

Although Kate had been acting years before her sister, she told Collider that it’s nice to have her sister along for the ride.

The first seven years that I was acting, I was on my own. Of course, my mom was there supporting me, but for her and I both, it was all new and I had to figure it out on my own. So, to have somebody else now to share it with is really amazing. It’s bonded us more now than we even were before.

When Vulture asked Kate about their similarities, she replied,

I think we sound remarkably alike. The voice is always something that takes me back, because I feel like I’m listening to myself. But in real life, we have different energies. She would say that, and anyone in our family would say that.

2. Her Great-Grandfathers Founded the New York Giants & the Pittsburgh Steelers

Wish it was football season pic.twitter.com/XkDrmBkEUE

On both sides of her family, Mara is football royalty.
She is the great-granddaughter of the first owner of the New York Giants’, Tim Mara, and, on her mother’s side of the family, the original Pittsburgh Steelers owner Art Rooney Sr.

Being that football is their family business, Mara told GQ that the family truly respects the game.
She said,

We dressed up for Giants games like we were dressing up for church.

People tend to believe that the Mara sisters broke into Hollywood was because of their sports’ connection. Mara dispels the myth to Vulture, saying,

3. Both of Her Recent Boyfriends Starred With Her in ’10 Years’

Mara’s current boyfriend is Max Minghella, son of director Anthony Minghella.
The pair met in 2010, as Kate’s sister, Rooney starred with him in The Social Network.
They split in 2012, and Mara moved on to actor Justin Long.

The funny part of the love triangle between the three is that they were all in the movie 10 Years.

On the popular Neflix series, she plays cold-­blooded reporter Zoe Barnes. One of her evil deeds includes sleeping with married Congressman Frank Underwood, played by Kevin Spacey.
The actress dished to Vulture about the criticism her character receives.

A lot of people don’t really like how cold and manipulative she is, which are things I really like about her.

Although she realizes that Zoe has flaws, Mara can connect with her on some level.

Obviously, I do not agree with a lot of the shit that she does. The stuff that I connected with was the human, emotional stuff. Her ambition.

Being only four years younger than Ledger, she was nervous that playing his daughter would not be believable. She told Elle that the late actor reassured her.

Heath was very sweet with me. He was lovely in every single way. 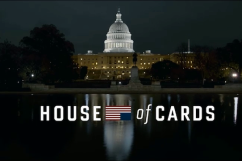