The new Star Wars cast list was released on April 29 and the female lead is getting a lot of attention.

Out of all the talent, the one who is virtually unknown is Daisy Ridley.

The British starlet is setting Hollywood abuzz with the question of who she is.

Here’s all you need to know about the girl in Star Wars Episode VII.
According to her Twitter profile, she is “Exploring that galaxy far, far, away!”

Soon after her new role was announced, her imdb page was updated to include that she’s best known for Star Wars: Episode VII.

Before that, it detailed her being most noted for Blue Season, Scrawl, and Youngers.

She was also on the second season of PBS’ Mr. Selfridge, playing Roxie Starlet opposite Jeremy Piven.

That clicking noise you hear is the Internet collectively scrambling to google Daisy Ridley.

Out of the entire cast, Deadline reported that Ridley is definitely the one generating the most buzz:

The biggest reaction so far has been to Ridley — a Brit actress who has been in a handful of UK series including Mr Selfridge — both because she is fairly unknown and because she’s the only new face keeping this from becoming a total sausage party.

There’s already speculation that she will play Han Solo and Princess Leia’s daughter, Jaina Solo, simply because she is sitting between Harrison Ford and Carrie Fisher in the above photo, taken at the table read.

Ridley’s father, Chris, told the Mirror about his daughter’s rapport with Ford:

She came home and said she’d had coffee with Harrison Ford and he said, ‘Don’t call me Mr Ford! Call me Harrison’

Daisy Ridley sitting inbetween Ford and Fisher? She must be their daughter #StarWarsEpisodeVII

Here is the actress in a British short that was part of SCI-FI-LONDON 48 Hour Film Challenge, Blue Season.

Since her Artist Films showreel has been removed from YouTube, this is one of the only videos of her that are available.

London-based Jonathan Arun is her agent.

Her profile page on the agency’s site describes the accents she can take on as Cockney, Dublin, London, Northern, RP, with London and RP being her native dialects:

Daisy Ridley was cast as Jessie in ‘Youngers’ for Big Talk Productions straight out of school. She then played the guest lead role of Fran in the long running BBC TV series ‘Casualty’. This year Daisy has shot the guest role Roxie Starlet in the second season of the ITV series ‘Mr Selfridge’, Charlotte in ‘Toast of London’ for Channel 4/Objective Productions and the guest lead Hannah Kennedy in ‘Silent Witness’ for the BBC. All of which are due for transmission early 2014. Daisy has just been offered a good role in the next ‘Inbetweeners’ movie which she will begin shooting in Jan 2014.

It also lists her physical characteristics:

Lucky for her, she will be right at home as Star Wars begins filming in May. According to The Guardian, the movie will be shot mostly at London’s Pinewood studios.

For the Resuscitation Council UK, she made a Lifesaver video that instructed on what to do when someone is choking.

The Daily Mail reported that actor Charles Hamblett has stolen the starlet’s heart.

According to his imdb page, he’s only acted in the TV miniseries, Fire, Plague, War and Treason.

There was already an impersonator out in the Twitterverse.

This account, that was created on April 29, got over 2,000 followers. It has since been suspended.

Overwhelmed by all the support. This is the greatest day of my life. I'm told I can't say who I'm playing yet, but it's exciting!

We can't believe this is real and we also don't really like all the fake that are already on twitter http://t.co/NhopvLm6Wf

British. That’s all you really need to know.

According to the profile on her agent’s site, she’s a singer and a dancer too! In the above clip, we see her singing “Moon River.”

Donna Hayward, a director at the school, told the Mirror:

I’m not surprised she has got this part. There was always something very special about her. She was always very feisty, but nicely feisty, very clever, independent. If she sets her mind on doing something she’ll achieve it.

Upon hearing the casting news, her alma mater tweeted:

Here’s the list of her talents in the arts:

7. She Was Called the ‘Biggest Curveball’ in the Cast

Film Divider described the choice of Ridley as “the biggest curveball in the Episode VII cast,” echoing the sentiments of the rest of the Twittersphere.

In addition to Ridley’s obscurity, the news came as a shock since there was talk that Oscar winner Lupita Nyong’o would be cast in a leading role.

We can report that there’s a recent Oscar winner who has been reading for a part for over the past month and she’s extremely close to signing onto the movie: 12 Years A Slave’s Lupita Nyong’o.

A source told The Hollywood Reporter that there’s still another female role to be cast in the flick.

Nyong’o may be the one who won that role. However, there’s also another British actress, Maisie Richardson-Sellers, who has been mentioned as a contender.

Kika-Rose Ridley, 25, who is represented by Models1, is the starlet’s sister.
Her portfolio seems to focus on fashion photo shoots. She also has a sister, Poppy, who’s 27.

According to the Mirror, her mother, Louise Fawkner-Corbett, is a publicity manager.

9. Her Dad Has Been ‘Sworn to Secrecy’

Her father, Chris, was interviewed by the Mirror. The 73-year-old told the paper that his daughter got the role in Star Wars recently.

They take out an option on you, they sign you and narrow it down. There are various stages,” he revealed. “Then it goes the other way and there is a result. But I’ve been sworn to secrecy.

Although he acknowledges that she her schedule is quite grueling, he’s confident of his daughter’s abilities.

“But if anyone can handle it, she can. They train from morning till night learning all the things they do…She’s managing very well but she’s very tired,” he said.

Her first big-screen part will be in Inbetweeners 2, released on August 6 in the UK and Ireland. 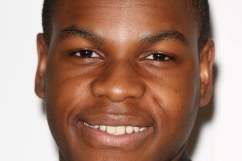