On tonight’s episode of Graceland, Mike and his team receive a tip on Solano’s next bus shipment of drugs. Johnny sets up a big meet between him and Carlos “Carlito” Solano Jr.

Here are the top spoilers for the episode entitled, “Tinker Bell.”

Jakes isn’t doing so well. His ex Cassandra won’t let him see his kid and he lost his room to Zelanski. In his drunken stupor, he seems to forget the latter.

Jakes is all kinds of messed up. Get it together, son. #LadyInWhite

Johnny tries to calm his friend down, but Jakes head butts him when Johnny mentions Daniel’s name. All the roommates, except Mike, come out of their rooms to break up the fight and take everyone downstairs to cool off. Mike then sneaks out of Paige‘s room to change before joining his housemates.

As the man in charge, Mike has to make the decision on who stays in the last room: newbie Zelanksi or the returning Jakes.

Charlie’s room isn’t available either, since she’s no longer bunking with Briggs. Right now, Jakes’ assignment is in limbo so Mike puts off the room decision for later. In the meantime, Mike and Briggs line up a few chairs as a make-shift bed for the passed out Jakes.

Since Charlie didn’t make contact with Carlito’s right hand man at the bar (and won’t tell Mike why), the rookie leader goes to his on-again lover Paige for help. She suggests trying to locate the next shipment through one of Solano Jr.’s dealers, Li’l Top. Paige will ask to buy a kilo of cocaine from Top, but based on her previous small buys, she needs to bring Briggs as her sugar daddy.

Li’l Top immediately doesn’t trust Briggs’ presence, especially if he’s a black. The veteran undercover agent calms his racist fears and tells the dealer he’s from the Dominican Republic. Once inside, Paige tells Top that her new boyfriend won a fortune at the slots and she wants more than her usual buy. Briggs hands him the dough. Top still isn’t convinced and stabs Paige’s hand to the table with his knife until Briggs identifies the lake he visited in the Dominican Republic as a child with his parents.

Things just took a nasty turn. The #LadyInWhite's in trouble.

Briggs thinks a minute, but delivers Li’l Top a satisfactory answer. The dealer pulls the knife from Paige’s hand, but keeps the money until he can acquire the kilo by Sunday.

Mike makes the semi-sober Jakes useful searching for “outliers” on surveillance tapes from the bus depot to pick up on Solano’s operation. Briggs comes in later to check on his friend and tries to sympathize, but Jakes doesn’t wasn’t his pity.

After hours of scanning tapes, Jakes picks up on a number of young, white women walking through the depot wearing little backpacks with Tinker Bell on them. The bags distinguish the girls from the crowd so the dealers can pick them up.

"We eat. We work. We die. There's no glory here." Jakes's outlook is pretty bad. Think he can turn things around? #LadyInWhite

Paige and mopey Jakes go stake out the bus depot. While Jakes is loathing in self-pity, Paige spots a young woman wearing one of the backpacks. Jakes wants to stick with tracking the bus, but Paige cares more about saving the innocent woman.

Inside the depot, she whisks the young woman into the bathroom and locks the door behind her. The young woman is from the Ukraine. Against her will, she’s delivering a drug shipment via balloons in her stomach with hopes of becoming an American in return. From her home she took a truck to a seaport and then sailed for two weeks until she arrived in Mexico. Her captors then placed her on the bus to California.

Paige wants to help her, but she needs the Ukranian to complete the shipment. Paige places a cellphone in the lining of the girl’s backpack and promises will come find her at her destination in Somar.

4. Johnny Has a Duel With Carlito

Johnny takes a big step tonight and sets up his own meet with Carlos “Carlito” Solano Jr. The son of drug lord Carlos Solano has a fondness for Mexican antiques, according to his right hand man Esteban, who Johnny chatted up at the bar last week. Zelanski helps Johnny obtain vintage dueling pistols, but there’s one problem. These pistols originated from France and not from the Mexican revolution.

Johnny has a plan to fool Carlito, but that’s not helping build Mike’s confidence. Johnny has seen Briggs do these operations a number of times, but Mike reminds him he’s not Briggs. Neither is Mike though, despite heading up this job.

Mike: "You're not Briggs." Johnny: "Yeah? Well, neither are you." New Mike's not making any friends. #LadyInWhite

Johnny sits down with Carlito and shows him the pistols. The serious collector doesn’t buy Johnny’s story that the guns come from Mexico when he discovers the gun’s signature is from a French gunmaker. The FBI agent adds that the guns were a gift to a Mexican revolutionary from the Spanish King Joseph-Napoleon Bonaparte, the elder brother of France’s military leader Napoleon.

Carlito isn’t happy with Johnny’s stories and challenges him to a duel. Johnny refuses until Carlito slaps him across the face. He has two choices: have Carlito shoot him in the chest or walk out eight paces. Johnny opts for the latter, but the drug lord starts to turn at step six to shoot his opponent early. Luckily for Johnny, Carlito’s sister walks in and stops the duel.

She’s angry at her brother’s actions and insults his stupidity. That gets a chuckle out of Esteban which earns the man a gun shot to the neck from Carlito’s pistol. Johnny tries to save him, but Carlito and his sister tell him to leave and they will handle it.

5. Jakes Finds the Busses, But Paige Can’t Recover Her Girl

Jakes tracks the bus that the Ukrainian woman arrived on earlier back to the bus garage. Mike is happy for the new lead and Jakes really couldn’t care less.

Paige tries to make good on her promise and tracks the cellphone she placed in the backpack to a parking lot in Somar. She searches for the girl and then calls the phone. She finds the backpack with the cellphone in a garbage and the young woman is nowhere to be found. 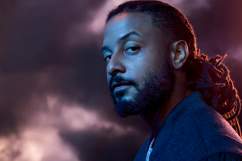 Read More
Graceland, Spoilers, TV
On tonight's Graceland, Mike and his team track down the busses that are bringing in Solano's drug shipments. Johnny goes undercover to bring Solano's son Carlito an antique gift in the episode "Tinker Bell."