Kari Wuhrer is the beautiful actress taking on the role of Ellen Brody in Sharknado 2: The Second One. Read on for the details on Kari below …

Ellen and Martin Brody are played by Kari and Mark McGrath. Those two character names are actually taken from the classic shark film Jaws, though Ellen was played by actress Lorraine Gary. In Sharknado 2, Ellen is the wife of Martin Brody and the sister of main character Fin (Ian Ziering). Fin has always been a bit upset about Martin getting together with his sister because Martin was a ladies man in the past. Nonetheless, the two must team up and fight off all the sharks that are in attack mode. 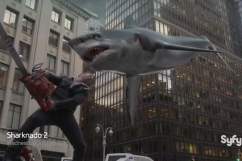 ‘Sharknado 2: The Second One’: 5 Fast Facts You Need to Know

2. She Used to Sneak Out of Her Family’s Home to Sing at Night Clubs

When Kari was a teenager, she would sneak out of her house to go sing at night clubs and she became a member of the band Freudian Slip. Eventually, her musical dreams came true. Wikipedia writes:

She signed a record deal with Rick Rubin and her debut album, Shiny, was released in 1999. In addition to her singing, she also wrote most of the songs on the album and played both the guitar and the flute on several tracks.

In the 1980’s Kari became a VJ on MTV and then a co-host on the game show Remote Control. Check out the old clip in the above video and see if you see another familiar face on the show – Colin Quinn.

4. She Had a Regular Role on the Sci-Fi TV show Sliders

Kari’s had several roles on different shows and projects, with a regular role on the show Sliders. Have a look at Kari being interviewed at celebrity convention Monster Mania as she talks about her many roles in the industry, in addition to her most important one – motherhood. She actually has three children at home and is married to husband James Scura. This is the second marriage for her.

Some of the films that Kari appeared in include Anaconda, Thinner, and Eight Legged Freaks.

5. Kari Has a Strong Story About Body Image

Dance recital at the Ebelll Theatre. My girls are by far the best here. pic.twitter.com/8pFw4mV5

When Kari was young in Hollywood, her record label wanted to buy her breast implants, so she thought, “Why not?” She later got her implants changed out and then, within six months, her implants encapsulated. As a result, she got rid of them. Once she became a mother, she had a whole new perspective on body image, especially having two daughters (pictured above). She appeared on The Drs to talk about her story and revealed that she strives to be a good role model for her kids.