On tonight’s Mistresses, Savi and her friends pack up the house before Savi has to move out. Joss tries to keep business partner Harry from heading back to Australia.

Karen deals with her dilemma between Jacob and her patient Anna, while April balances motherhood and her affair with the married Daniel.

Read on to see how the ladies deal with their recent man troubles in the episode, “An Affair to Surrender.”

April wakes up at Daniel’s place and regrets her decision to come back. She doesn’t like that he makes her love him and makes her need him when he’s married to someone else. He tries to tell her again that he really loves her, but she rushes out without letting him know if she’ll return.

Breaking up with sexy, smoldering Daniel isn’t just hard on April. Her daughter Lucy has taken a real shine to the artist and thought they would all be a family. She sees the way her mom lights up when he’s around.

Now Lucy’s got her mom thinking that maybe she could make things work with Daniel. She goes back to try again with Daniel (or sleep with him again. This relationship doesn’t seem to be moving out of the bedroom).

April keeps her renewed romance with Daniel secret from her friends. She doesn’t take too kindly to Karen’s suggestion that her situation is the same as her therapist friend had with her married patient Tom last year. April entered her relationship with Daniel not knowing his marital status, while Karen knew full well what she was getting herself into. Don’t worry, the two ladies made up later (Hoes over bros!)

Lucy’s friend Peyton is now the subject of the school rumor mill when her classmates find out that her father Steven (who hit on April earlier this season) had sex with another girl’s mom at a school sponsored event. Lucy can’t believe a woman would sleep with a married man, and she’s doubly stunned when she learns that Peyton’s mom Samantha is aware of her husband’s extracurricular activities.

April tries to explain why Peyton’s mom may be staying in her relationship, but Lucy can’t understand. April has always taught her daughter to have enough self-respect to not let anyone make a fool of her. Tough talk for the woman who’s dating a married man. Lucy’s so impressed with her mother’s wisdom that she wants to grow up to be just like her (if kids only knew their parents’ secrets).

After that conversation with Lucy, April goes to say goodbye once and for all to Daniel. She still loves Daniel, but she feels like a hypocrite remaining in the relationship. It’s not fair to Daniel’s wife, her daughter or herself to keep lying about their relationship. She will not be calling Daniel again. Goodbye sexy-smoldering!

Is this really goodbye? #Mistresses

Just when things were beginning to go well for Karen… #Mistresses pic.twitter.com/H8GPadkmX3

Karen goes to see her therapist Dr. Blakely to talk out her dilemma about dating Jacob when he broke up with Karen’s patient Anna to be with her. She wants to stay with Jacob because despite knowing her history and her faults, he still wants to have a relationship with her. On the other hand, Anna may go back to a suicidal state if she has to change doctors.

Dr. Blakeley tells Karen she needs think of herself and focus on her relationship with Jacob, which is the first healthy relationship she’s had in a very long time.

Karen does the opposite and dumps Jacob. She claims her therapist said she shouldn’t have started dating so soon. Jacob doesn’t understand when Karen was the one that asked him out and was dating other men before they got together. He’s also not happy that he broke up with his ex-girlfriend (Anna) only to get dumped a few days later.

To make matters worse, Anna disappears for a few days. Karen can’t reach her by phone and the address she gave to the hospital when she checked in originally was a fake. The only person she knows that Anna may answer the phone for is Jacob.

Karen has to tell him that she is Anna’s therapist and he realizes that’s why Karen broke up with him. He makes the call to Anna, but she doesn’t pick up his phone call either. He apologizes for getting angry when she broke up with him the other day, not knowing the full story.

Apparently, Anna couldn’t receive any calls on her retreat to Joshua Tree. She drops by unexpectedly to Karen’s apartment/office and tells her therapist about Jacob’s call. Anna thinks that her ex wants to get back together, not knowing Karen made him make the call. Because of the help she’s received from Karen, Anna plans to wait a few days before calling Jacob back, but she’s excited about the prospect of reconnecting with him.

She better hold her horses. Jacob asks Karen about Anna’s intentions, but doctor-patient confidentiality limits what Karen can tell her friend about his ex. He’s not too interested in getting back together with Anna and wants to continue his relationship Karen after he lets Anna down easy.

That won’t be easy after Anna spots Karen and Jacob kissing in the elevator as the doors open right in front of her.

3. Savi Chooses Not to Sell Her House

Toni’s up to something! She offers Savi an olive branch when she realizes her office mate and boss Dom are having relationship issues. Toni wants to be friends with Savi, but Savi doesn’t see that happening. She can’t be friends with people she doesn’t trust, and Toni ranks high on that list for Savi.

The buyers for Savi and Harry’s home want to take possession of the home sooner so they can remodel the kitchen. Why the buyers would want to change a kitchen designed by the A-list chef Harry himself remains a mystery. Also a mystery, to Harry at least, is why Savi is looking at condos when she should be moving in with Dominic.

Joss goes with her big sis to check out the extremely white-walled condo. Savi fears Dom will start dating someone while they’re “on a break,” but Joss knows that Dom loves her and they’ll make up (Joss, have you met Toni?). Savi believes her sister this time, especially after she didn’t listen to Joss about revealing her friendship with Zack to Dom sooner.

While cleaning out her closets, Savi and the ladies reminisce about all the memories they have shared in that house. It’s getting Savi thinking and the next day she tells Joss that she’s not going to move. They spent their childhood moving over 10 times and this is the first house she’s spent the most time in. Savi will buy out Harry’s stake in the house (unless he changes his mind as well since he’s remaining in Los Angeles).

Scott doesn’t mind making room for Joss’ shoes in his closet of women’s shoes, but he wants her to reciprocate with three little words. Before making her extraordinary three-point shot last week, Scott told Joss that he loved her. With a little prodding, Joss also utters “I love you” to Scott.

Scott takes Joss to his restaurant. He owns it with his friend Greta Jager, a former swimsuit model. He wants to bring Joss on as the restaurant’s event planner, a position that could be hers if she puts on a great opening night event. The party won’t need Harry’s assistance as the restaurant already has a head chef.

Someone needs to tell Greta her chef Deeter doesn’t know how to cook well, thought. Scott won’t say anything and Joss can’t say anything without losing the job opportunity. Instead, she sneaks some of Harry’s food from their event at a bris and serves it at the restaurant’s next taste testing.

When Greta learns the good food came from Harry, she invites him in for an interview. He’s not happy with Joss for going behind his back like that, but she’s forgiven when he decides to take the job and stay in California. He’s not an idiot!

Joss is thrilled about her friend and business partner Harry not returning to Australia, but her boyfriend Scott is a little nervous. He doesn’t understand why Harry staying is so important for Joss. She tells him that he shouldn’t be worried about her and Harry. He’s more like a brother to her. But now that Scott has planted the idea, Joss can’t help but think about that possibility.

Dom comes to drop off papers for Toni in her office. Again, she tries to make friends and offers Dom an ear while he’s going through his tough time. Dom has his own friends to talk to, but she doesn’t see them around. He’s focused on his career while spending the rest of his time with Savi. If he really wants to talk, Toni also stays at the office until midnight so she’s around. To talk, of course. 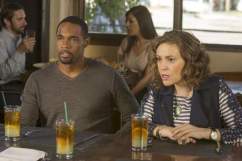 Read More
ABC, Alyssa Milano, Mistresses, Spoilers, TV
On tonight's Mistresses, Savi enlists her friends to help pack up her home and Joss schemes to keep Harry in the U.S. in the episode "An Affair to Surrender."