Scott Commings is one of the two last men standing on this season’s Hell’s Kitchen and he’s the winner. Check out all the facts on Commings and how he became the chef he is today. 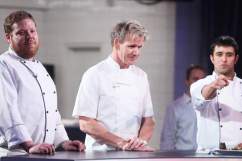 1. Commings Admires Ramsay Though the Two Butted Heads at Times

On the show this season, Commings lost it a bit after being yelled at so much by Chef Gordon Ramsay. It seemed that Commings had reached his point and couldn’t take anymore. Despite their arguments, Commings admires Ramsay and told the Northwest Herald:

[Ramsay] is an amazing individual,” he added. “He has gotten to where he is because of what he does with food. His kitchen mannerisms are so impressive. How he slopes through a kitchen and how every move means something. He was an amazing person to be learning next to.

Beyond the yelling and stuff that goes on, it was amazing to be able to see how professional and how incredibly passionate he is about food. He’s just incredible at what he does.

2. Hell’s Kitchen Was a Surprise For Him

Commings had thrown his name into the void hoping for it to be picked up by a television show, but nothing was planned out or specific. The Woodstock Independent writes:

Commings, who has worked as an executive chef and gardener at Loyola University Chicago Retreat and Ecology campus in Woodstock for the past four years, was called onto the show when producers found his name floating around for cooking shows, which he had entered in mostly for fun. After interviews and callbacks, he headed out to Los Angeles for filming in 2013.

3. His 6-Year-Old Daughter Isn’t a Fan of Ramsay’s

According to what Commings told The Woodstock Independent, his young daughter isn’t the biggest Gordon Ramsay fan.

My 6-year-old saw the show and I came home after the first night and she said, ‘Dad, I saw you on TV and I didn’t like it when he didn’t like your dish,’” he said, imitating his daughter’s distraught and tearful tone. “I said (to my wife), ‘Honey, I think we might not want her to watch the rest of the show.

4. Commings Has Been Interested In Cooking Since He Was 13 Years Old

The Gold Derby asked Commings about how he found his love for cooking and he said:

I have always been interested in cooking and raiding my Grandmothers “good cheese” stash was a constant. It wasn’t until my late teens that I decided to pursue the industry as a career, however I have worked in the industry since I was 13.

5. He Has Advice For Other Chefs Out There

When The Gold Derby asked Commings about what advice he has for other chefs and what his favorite foods to cook are, he replied:

I just like to cook with fresh ingredients. Also I enjoy creating bread. You have to use all of your senses, touch being most important, to create that perfect loaf. It gives you an emotional connection to food. Cook from the heart, source great ingredients, and make a connection with your local farmers.