Tzi Ma returned to 24: Live Another Day as Jack Bauer’s former torturer Cheng Zhi, who intelligence officials thought had died trying to escape prison. He’s back with the intentions to start World War III and seek his revenge on Bauer one more time.

Ma originated the role on 24 during the series’ fourth season. The Chinese-American actor’s career spans nearly 40 years and includes roles in the Coen Brother’s The Ladykillers, The Quiet American with Michael Caine and Rush Hour with Jackie Chan and Chris Tucker.

Here’s what you need to know about Ma and whether his character Cheng can execute his plan for world domination.

1. Cheng Zhi Wants the Chinese to Start a War With the U.S.

After his escape from prison three years ago, Zhi partnered with Russian intelligence operative Anatol Stolnavich to start a war between the United States and China. They brought aboard Adrian Cross to create an override device that could hack into America’s military defenses and launch attacks without the U.S. having control.

Ma told Digital Spy about the new Cheng Zhi that has returned for the reboot:

Back in the day — in Days 4, 5 and 6 — he was a dutiful servant of the government. Now he’s gone rogue — his whole attitude and demeanor and motivation has changed. What drives him is completely different from what he was. Back then, he had to answer to all of these people. Now he answers to no-one but himself — so that makes him a lot more dangerous!

When Cheng captures Chloe O’Brien, she covertly records his voice on a dropped cellphone for Jack to find when he arrives at Cross’ hideout to retrieve the device. Cheng’s return puts Jack on high alert and causes concern for his former lover and President Heller’s daughter Audrey, whom Cheng held and tortured during Season 6 of 24.

Watch Jack Bauer break the news of Cheng’s return to President Heller and his team in the video above.

Since his career began in 1975, Ma has portrayed characters good and bad who represent many backgrounds and nationalities. The Chinese-born actor told the Asia Pacific Arts, in the video above, about the responsibility he takes when choosing his roles:

I am the representative of all of these different places, governments and regimes and attitudes and philosophies. You may not agree with it. … You have to be a part of it because it allows the audience to think about certain things that is worthwhile thinking about and talking about.

3. He Fights Against Asian Stereotypes in Media

Ma struggled to find strong roles in the beginning of his career. As an elder in the acting business, he advocates for better interpretations of Asians and Asian-Americans in mainstream media. He told the Canadian publication RicePaper the problem Asian-American actors face when the majority of Hollywood writers are middle-aged, white men:

Don’t get me wrong, these are very gifted and talented writers, but when given the task of writing an Asian [or] Asian-American character, unless they have access and friends who are Asian [or] Asian-Americans, they often resort to renting movies for research that offers up a ‘Shake ‘n’ Bake’ of all Asian ethnics into one big Asian stereotype. Then, unfortunately, other writers will follow and perpetuate that Asian stereotype into an even bigger one. Then we look at the script and think, ‘What the hell is this?’

Ma’s film Red Doors explored the dynamics of a Chinese-American family living in the suburbs of New York. It won the Best Narrative Feature award at the 2005 Tribeca Film Festival. Watch the trailer for the film above.

Ma was born in Hong Kong on June 10, 1962. His parents immigrated to the United States with him and his five siblings and settled in New York City. He married his wife, actress Christina Ma, in 1994.

His career choice to become an actor wasn’t the dream his “traditional” parents had in mind for him, Ma said in 2006:

I always knew that I wanted to be an actor. While my siblings went on to have more professional lives, I studied classical theatre and dance. Certainly not what my traditionally Asian parents wanted for me.

Apart from his recurring role on 24, Cheng has found success in feature films working with big name actors such as Pierce Brosnan in Dante’s Peak, Richard Gere in Red Corner and Laurence Fishburne in Akeelah and the Bee.

In The Quiet American, he played an assassin/spy posing as Michael Caine‘s trusty assistant, and he played The General in The Lady Killers, a member of Tom Hanks‘ group of thieves posing as a church-music playing band.

He also made appearances in Rush Hour and Rush Hour 3 opposite Jackie Chan and Chris Tucker. Watch Ma as Consul Han in the comic action flick below: 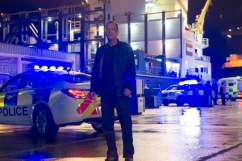