DJ Avicii, aka Tim Bergling, is mesmerizing the world with his melodies.

He’s been nominated for two VMAs, one for Best Video with a Social Message, and the other for Best Pop Video.

1. He’s Arguably the Biggest DJ in the World

NORTH AMERICA! Tix to the #TRUETOUR go on sale 1/31 12PM. Go to http://t.co/BIRJGqWMt4 4 all stops and get ur ticket! pic.twitter.com/OqbNTNOIi9

In an interview with GQ, he said, “I love DJing, I do. I love everything that comes with it; it’s fun and it’s kind of glamorous.”

However, there are times when the superstar feels out of place. “It’s just like when it’s right in the moment and you have that stupid bright light on you. It feels so awkward,” he admitted.

2. His Breakthrough Was ‘Wake Me Up’

The song was the first single off his 2013 album, True.

He told Ask Men why he chose that title. “…because over the course of the last couple of months, I’ve tried to remain true to myself and the music that I have made with all these different people. It feels like whatever people like to say about it, with all the controversy surrounding it, I’ve been true to myself. This is what I like. I mean, it’s very personal to me; this album is for me more than for anyone else,” he explained.

3. He Stopped Drinking & Met His Girlfriend the Next Day

@Avicii and his girlfriend pic.twitter.com/Zw09h4WTNe

Experiencing a whirlwind of success at such a young age, he started relying on alcohol more and more.

“You are traveling around, you live in a suitcase, you get to this place, there’s free alcohol everywhere—it’s sort of weird if you don’t drink…I was so nervous. I just got into a habit, because you rely on that encouragement and self-confidence you get from alcohol, and then you get dependent on it,” he told GQ.

When he was 21, it all caught up with him and he got a pancreatitis attack. “So that forced me to do a 180 and stop drinking,” he told Time.

The day after he ended his bout with alcohol, he met his girlfriend. “I’ve gone out partying sober and I’ve met my new girlfriend from day one sober…” he told Time.

He told Time, “Avici is the lowest level of Buddhist hell.’

He added another “i” on MySpace, the name, “Avici” was taken.

Rolling Stone reported that “collaborators this time include Jon Bon Jovi, Serj Tankian of System of a Down and Chris Martin of Coldplay. There’s a song with Billie Joe Armstrong called “No Pleasing a Woman,” and a reggae duet between Wyclef Jean and Matis­yahu.” 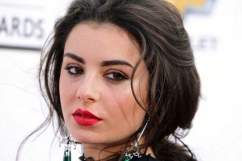 Read More
AVICII, Celebrities, Music, VMA
Avicii is arguably the most famous DJ in the world, and has been nominated for two VMAs. Here's what you need to know about the 24-year-old.