Say hello to one of the new faces on The Biggest Loser, Jennifer Widerstrom. Jennifer comes aboard as a new trainer on the show, but this isn’t her first time on the small screen. Check out all the info on Jennifer below:

1. Jennifer Widerstrom Is Jillian Michaels’ Replacement on The Biggest Loser

Jillian Michaels has left The Biggest Loser and Jennifer Widerstorm is here to take her place, along with new trainer Jessie Pavelka. Check out the two newbies in the above video.

Michaels reportedly left the show because their were a few issues she had with production. People writes:

One main issue: how she was being portrayed in recent seasons. “In the beginning of the show it was tough love. You saw the tough, and you saw the love,” she says. But more recent episodes, Michaels says, seemed to focus more on her being harsh, rather than helpful. “You saw none of the relationships, none of the bonds that I build with my clients,” she says.

2. You May Know Her as Phoenix

Jennifer was once Phoenix on American Gladiators and she used to have pink hair. How awesome is that? Check out the above clip of Phoenix in action.

Jennifer actually credits American Gladiator for preparing her for The Biggest Loser. She told the Chicago Tribune:

It was a blast. We were grown-ups playing games. I would be laughing and taunting (the contestants) sarcastically — I’m from Chicago, I don’t think I was mean. The only time I was mean was when some of the girls would play dirty and try to pull my top down: ‘You want to play dirty? I play dirty too.’

3. She Calls Herself the Soldier Of Love

One thing that Jennifer loves is connecting with people. She considers herself a “soldier of love,” telling the Chicago Tribune:

I love people and connecting with them. I think I’m very good at helping people find their way. I chose fitness and health as a way to do it. This show offers me a platform and place to reach them.

4. Her First TV Appearances Were on Access Hollywood Live

Jennifer grew up enjoying track and gymnastics, not really getting into fitness until her mid-twenties. She eventually moved to Los Angeles and became a group fitness instructor, which turned into private training sessions. Then she started to do spots on Access Hollywood Live.

5. Arnold Schwarzenegger Is Her Hero

Jennifer’s ultimate hero is Arnold Schwarzenegger and she’s had the pleasure of hanging out with him at least a handful of times. She posts photos of him on her Facebook and Instagram as well as puts quotes of his online. Most recently, on September 8, 2014, she posted an old photo of Arnold on Facebook with this as her caption:

“The worst thing I can be is the same as everybody else. I hate that.” – Arnold Schwarzenegger

On another occasion, she posted a photo of herself with Arnold and some cake with this as a caption:

I may or may not have housed my hero’s Birthday cake yesterday…Lol. Happy 66th!! #arnoldschwarzenegger #muscleandfitness #notacardboardcutout 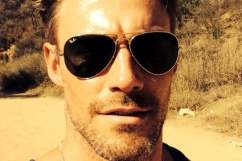 Read More
Reality TV, The Biggest Loser, TV
Jennifer Widerstrom, along with trainer Jessie Pavelka, is taking on The Biggest Loser season 16. Check out all the info on the former American Gladiator.